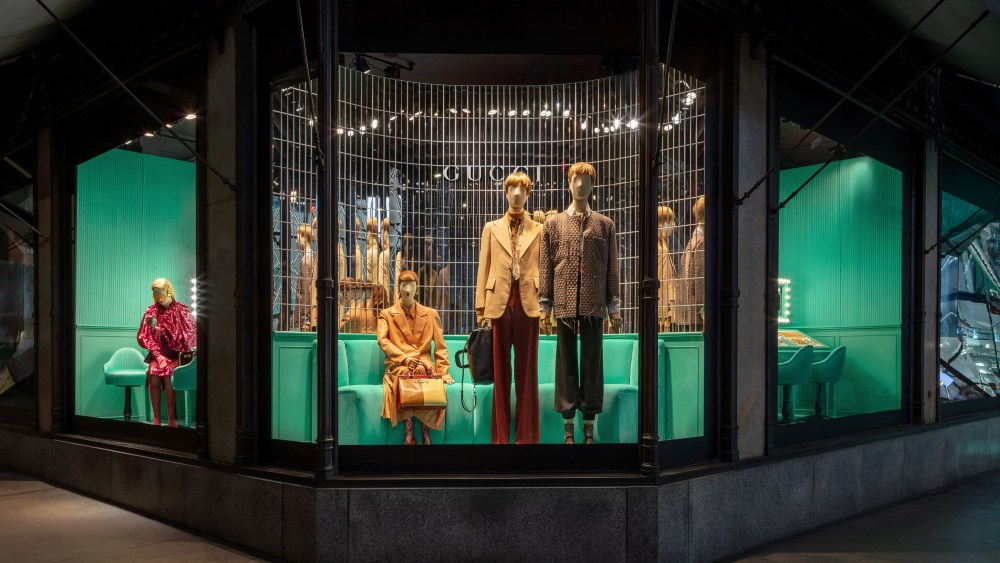 Gucci and Saks Fifth Avenue have cooked up a takeover in New York. The two have unveiled exclusive Gucci ready-to-wear and accessories at Saks, as well as the house’s first genderless fragrance, Gucci Memoire d’une Odeur, that are featured in the windows and showcased throughout the flagship.

The exclusive Gucci collection designed for Saks features 22 one-of-a-kind looks and accessories for women and men. The looks feature ornate colorful fabrics, modern tailoring and outerwear pieces, including capes and coats. Specially created accessories for Saks include Gucci Zumi top handle bags in precious skins, a sandal with a leaf motif that wraps around the ankle, mules with a crystal studded tiger head on the toe, and the Gucci Grip watch.

Other looks from the fall collection adorn the windows and dedicated showcase areas on the women’s and men’s floors in the store. The fragrance, which blends Roman chamomile and Indian coral jasmine, has Harry Styles as the face of the campaign. The fragrance is being sold at Saks Fifth Avenue New York.

Gucci has taken over the department store with dedicated windows and in-store displays. The windows on Fifth Avenue, 50th Street and 49th Street highlight the Saks exclusive rtw and accessories, fragrance and Gucci beauty. The windows have green hand-brushed boiserie, green carpeting and velvet curved sofas, vintage TVs and mannequins in Gucci rtw and lipstick. The special Gucci in-store installations include handbags on the first floor, fragrance on the second, rtw on three, men’s rtw on seven and shoes on eight. The takeover will be on display until Sept. 23.