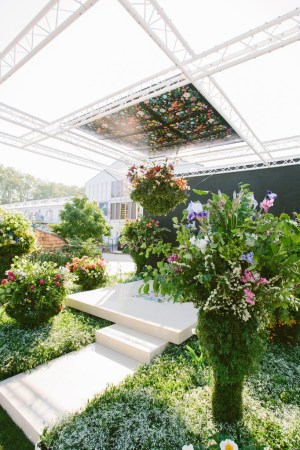 TOP BLOSSOMS: Gucci has scooped a silver-gilt medal for its Flora-themed garden at the RHS Chelsea Flower Show, which opened in London today. The award-winning designer Sarah Eberle created a garden inspired by Gucci’s Flora motif, winning the award in the fresh garden category. The Flora illustration, drawn by the artist Vittorio Accornero, was commissioned in 1966 by Rodolfo Gucci for a scarf for Princess Grace. Dedicated to the four seasons, it features flowers, fruits and insects, in 37 colors. Eberle filled her Gucci garden with plants and flowers including peonies, water lilies, holly, tulips, mint, clematis blue hybrid and lily corydalis. There are four grades of award at the show, which runs through Saturday, and the silver-gilt is the top prize after gold.