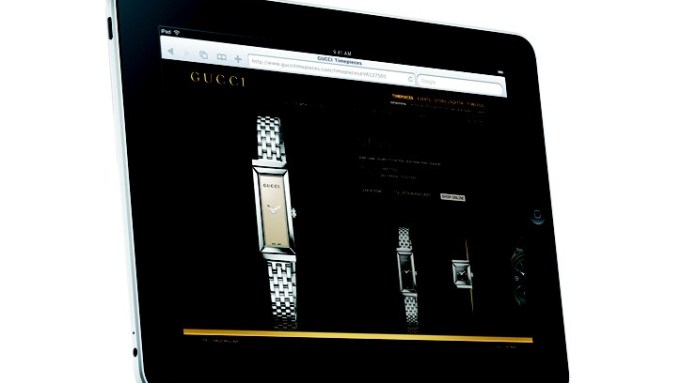 TICK TOCK: Gucci will today launch a Web site dedicated to its fledgling watch business. Accessible via the gucci.com site or through the brand-new guccitimepieces.com platform, it is iPad ready. High-resolution images of watches are showcased against a backdrop of browns and golds, and the site also features Gucci’s history, a listing of in-store events and a global store locator. Gucci’s latest watch models are U-Play, which allows the wearer to change the combinations of colors and materials of the bezel and bracelet, and the G-Frame, a timeless and elongated style available in beige, antique rose and slate blue. Watches last year accounted for 4.6 percent of Gucci’s 2.2 billion euros sales, or $2.9 billion at current exchange rates.

CARE BEARS: The East Side Social Club lived up to its name Tuesday when Sharon, Lauren and Ashley Bush hosted a Mother’s Day luncheon for the official debut of Feed teddy bears. Lauren Bush, who started Feed with Ellen Gustafson, aims to build on the success of Feed recycled bags by introducing new categories, such as T-shirts. About 55 million school meals have been served to impoverished children. The teddy bears, sales of which provide three or five meals, are produced by Sharon Bush’s company Teddy Share, a charitable business named after Teddy Roosevelt. The elder Bush said she started another teddy bear company to help homeless and abused youngsters when her children were young. “I dragged Lauren and Ashley to all these soup kitchens to instill in them the need to give back.” (Ashley Bush will soon be honored by Barnard College for her own soup-kitchen-related efforts.)

Before Dylan Lauren, Nicole Miller, Patricia Duff, Tinsley Mortimer and the rest of the crowd tucked into entrees prepared by Billy Gilroy’s chef-son Devon, Lauren Bush reminded them, “It is almost Mother’s Day, and it is so important to be mindful that a lot of people in the world don’t have what we have.”

TIME TO REMEMBER: Friends and family will be on hand for a memorial service in honor of Giacomo Festa Bianchet May 17 at 4 p.m. at The Friars Club at 57 East 55th Street in Manhattan. He is survived by his wife, Rebecca Moses.

ISLAND SHOPPING: Elie Tahari will open its first freestanding California boutique at Fashion Island this summer. The company said the 2,500-square-foot store, located near Neiman Marcus and Bloomingdale’s at the Orange County shopping center, will offer the largest array of Elie Tahari merchandise, including women’s, men’s and accessories, outside of New York. In collaboration with the brand, interior designer Piero Lissoni will develop the look of the store with white oak flooring, Venetian plaster walls, silk carpets, vintage chandeliers, steel rails, midcentury modern furnishings and a glass and metal facade. “We are eager to continue to expand the number of freestanding Elie Tahari boutiques and are delighted to be adding this eighth store in the United States to our growing portfolio,” said Elie Tahari, chair of his namesake brand.

CAMBODIAN BREEZES: Elizabeth Kiester, the peripatetic founder of Wanderlust, is bringing her Southeast Asian brand to New York. Kiester gave up her New York apartment when she fell in love with Siem Reap, a popular tourist city in Cambodia. She set up shop in a 1929 French Colonial house. From Friday to May 16, the Wanderlust signature collection will be available at a pop-up shop at 439 Metropolitan Avenue in Brooklyn and online at wanderlustcambodia.com. Kiester also created a capsule collection for Madewell that consists of breezy baby-doll dresses, shirts that can be worn as beach cover-ups or over jeans, oversize sarongs, leather and rubber flip-flops and colorful bracelets. “It works well with the Madewell wardrobe,” Kin Ying Lee, head of Madewell design, said of the Wanderlust collection. “Elizabeth designed it keeping our denim in mind.” The collection will launch on May 3 at Madewell’s SoHo store and roll out to other locations during the month. Kiester’s Wanderlust line for Madewell will be feted at the retailer’s SoHo store on Thursday. Cambodian snacks will be served and products will be sold in a hut built to replicate Kiester’s Siem Reap shop down to the bougainvillea that climbs the walls. “We’re working on different displays for our other stores,” said Gigi Guerra, Madewell’s marketing director, adding, “[Elizabeth] brought Cambodia to us. It’s perfect for summer and has a lightness to it.”