Gucci to Sponsor Exhibit on Nick Cave in Copenhagen

The Australian musician is a friend of the brand and a regular guest at Gucci fashion shows and events.

The poster of “Stranger Than Kindness: The Nick Cave Exhibition,” running March 23 to Oct. 3 in Copenhagen.

SUPPORTING FRIENDS: Gucci is strengthening its commitment in support of arts and cultural activities sponsoring an upcoming exhibition on Australian musician Nick Cave.

The Kering-owned fashion house will be the main sponsor of “Stranger Than Kindness: The Nick Cave Exhibition,” running March 23 to Oct. 3 at The Black Diamond venue — part of the Royal Danish Library — in Copenhagen.

The initiative is not surprising, in light of the personal relationship Gucci’s creative director Alessandro Michele has with Cave, who is a regular guest at Gucci fashion shows and events, including the latest LACMA’s Art + Film Gala hosted earlier this month in Los Angeles.

The exhibition is set to offer a journey into the creative world of Cave, bringing together large-scale installations and original atmospheric soundscapes with more than 300 objects from the musician’s own collection, the Nick Cave archive at Arts Centre Melbourne, the collections of the Royal Danish Library and a number of private lenders.

Spanning more than 50 years of Cave’s life and career, items showcased in the exhibition will include original artwork, handwritten lyrics, literature, photography, videos, set designs and collected personal artifacts presented through an immersive narrative across eight rooms. In particular, the soundscapes have been composed and recorded specifically for the exhibition by Cave and musician Warren Ellis, who is also a member of the “Nick Cave and the Bad Seeds” band. 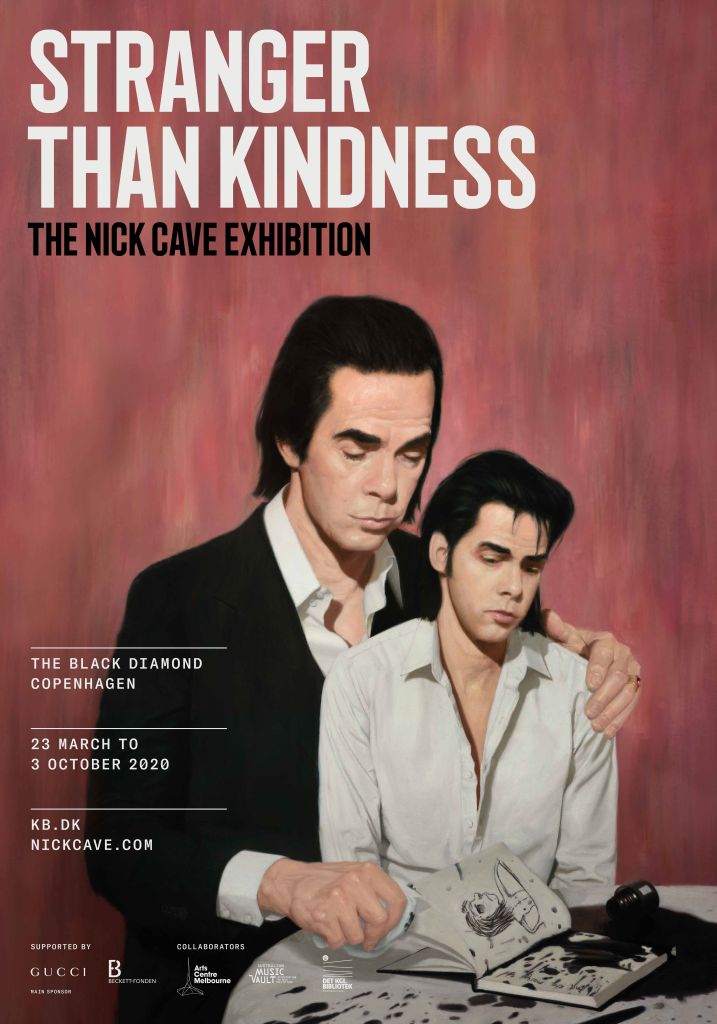 The poster of “Stranger Than Kindness: The Nick Cave Exhibition,” running March 23 to Oct. 3 in Copenhagen.  Courtesy Photo

The retrospective has been developed and designed by Royal Danish Library’s exhibition coordinator Christina Back and the Arts Centre Melbourne’s director of collections Janine Barrand, as the two institutions collaborated on the project. In particular, the Arts Centre Melbourne is the custodian of the Australian Performing Arts collection, to whom Cave donated his archive in 2006.

The Black Diamond venue serves as a cultural outpost of the Royal Danish Library, an old building in central Copenhagen holding one of Northern Europe’s largest collections of rare books, manuscripts and artists’ archives. The 1999 extension contrasts with the old library with its modern, waterfront design made of polished black granite cladding and irregular, sharp angles, conceived by Danish architects Schmidt, Hammer and Lassen.

Flanking the exhibition, a “Stranger Than Kindness” tome published by Canongate Books will be released on March 23. Priced at 35 pounds, the volume will also include an essay by American writer Darcey Steinke.