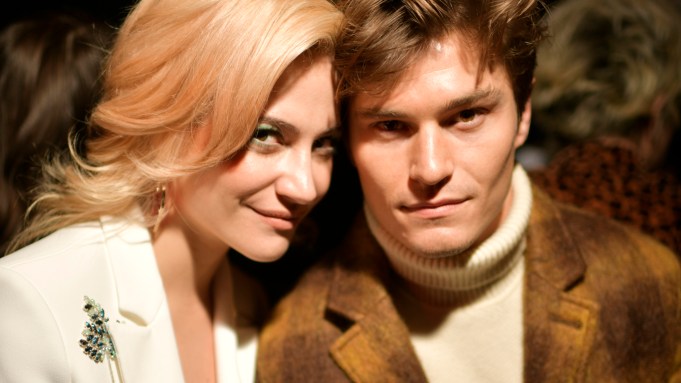 The drop in temperatures that hit Paris as couture opened Monday morning got the attention of the guests at the Schiaparelli show. “It’s absolutely freezing,” said Laura Carmichael.

“I’m from Canada, so this is like summer,” said Coco Rocha, who was attending her first Schiaparelli show.

“I’ve worn vintage pieces for shoots,” the model and entrepreneur explained. “Taking them out of the archives, there was a list of what we could and couldn’t do. We couldn’t wear deodorant, I would never have thought of that. The memories I have of wearing those vintage pieces are on my mind here today.”

Carmichael recently wrapped the miniseries “The Spanish Princess,” out this spring, and also has the “Downton Abbey” movie releasing in September alongside costar Michelle Dockery, who was seated next to her in the front row.

Joséphine de La Baume, meanwhile, just finished filming World War II movie “Waiting for Anya” with Anjelica Huston and Jean Reno, and will soon start shooting a film with Sylvie Verheyde about notorious French brothel keeper Madame Claude. “I play a pimp,” she joked, before adding, “No, I wish. I play one of the girls.”

De La Baume will also be releasing her first single with new band Film Noir in a month’s time, she said.

Pixie Lott also had music in mind, with her next release set for the end of the month. “It’s very different to before, it’s very stripped back, about the song and the voice and the lyrics, rather than a clubby thing.”