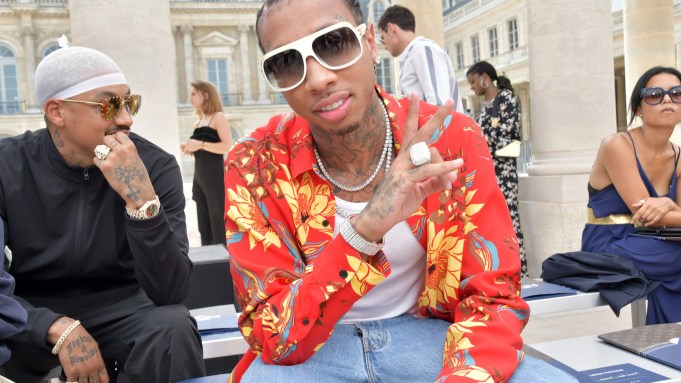 The heat was on at the Louis Vuitton show in the Palais-Royal Gardens on Thursday where guests including Tyga, Will Peltz and Russell Westbrook swapped heat-survival tips under the searing sun — under which hot spotlights were added.

Clad in a Vuitton safari shirt, Italian actor Luca Calvani arrived toting one of the house’s monogram weekender bags full of cold and dry washcloths. “Try to enjoy it, wear light clothes,” said the actor, who is filming a movie called “Carnival” in Greece. “Hence the mustache, it’s set in the Thirties,” he noted.

“Bottles of water,” said a pragmatic Ben Robson. “I got in Tuesday so it’s progressively gotten hotter since I’ve been here but I’d rather it be hot than cold.” With season two of “Animal Kingdom” underway, the actor is working on “getting another job in the hiatus.”

“Oh man, the least amount of layers as possible. Bring water with you, embrace the elements and try to wear nice T-shirts from Vuitton,” suggested Victor Cruz, who is working on a collaboration with a brand based in L.A. “There are a lot of good brands coming out of L.A., like John Elliott, a lot of really good people, it’s a good moment for L.A.”

Will Peltz confessed he was struggling in a leather jacket. “I’m so hot right now but I’m trying to play it cool,” said the actor, who has two movies due out: “Time Freak,” in which he plays “the pan-sexual best friend to Sophie Turner,” and “Sierra Burger Is a Loser,” in which he plays “a douchey boyfriend as per usual.”

Russell Westbrook had unbuttoned his shirt. The basketball star said he’s in the early stages of preparing his own clothing line. “It will be a combination of sportswear, casual. I can only hope that one day I’ll get to present here in Paris or New York, to have my own show. That would be a great blessing,” he said.