Phoebe Philo Takes the Stage at Vogue Festival in London

The designer, not one for making public statements, broke her silence over the weekend to talk about the possibility one day of having her own label. 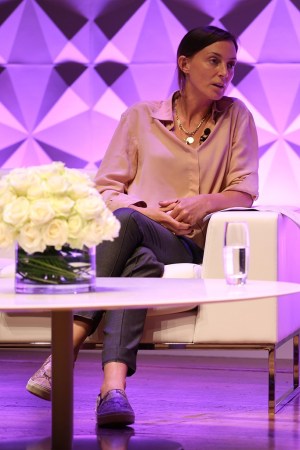 Rosie Assoulin Partners With HIM Co.

GUT INSTINCT: Phoebe Philo, not one for making public statements, broke her silence over the weekend to talk about the possibility one day of having her own label. “Discussions with LVMH [Moët Hennessy Louis Vuitton] before I joined Céline went on for a long time,” said Philo during a Q&A with British Vogue editor Alexandra Shulman at the third annual Vogue Festival in London. “They started off talking about me having my own label, and then turned into a conversation about me joining Céline. It hasn’t happened so far, but maybe it still will.”

Philo also talked about Céline’s cool quotient. “When I came to the house, I had an idea of what I thought the core values of Céline should be,” she said. “Céline had no recognizable silhouette, no famous historic designers, it hadn’t been licensed out in the Seventies and Eighties as many other brands had. I’ve never really looked into archives anywhere I’ve worked, actually.…I feel, like it or hate it, it doesn’t matter, I just like it to be strong. I think it’s worth doing something differently.”

Regarding her beliefs about dressing, Philo said, “Women should have choices, and women should feel good in what they wear. And I guess there’s a political statement behind Céline, which is that the woman should go out there and do what she wants to do.”

Philo wasn’t the only one talking about launching a signature line. Campbell is set to unveil hers next year. “I used to think that if I started my own line then designers wouldn’t want me to work for them anymore, but now I feel different, and I will be doing that. Hopefully the first item will be out in 2015,” she said.

Blahnik, meanwhile, reminisced about his childhood designing shoes for lizards made of silver foil; his latest three addictions — Netflix, sugar and shoes — and his love of working solo. “I do everything. I sketch, I try the shoes, I do everything. I’m surprised that people have teams, that’s crazy,” he said. “The only thing I don’t do is the sizing, because I don’t like numbers.”

Burch said she sometimes laughs at her younger self. “I remember saying that I wanted to build a global lifestyle brand, and I had no idea what that meant or what it would take,” she said. “The answer? A lot of cold calling and being honest with potential investors. I said: ‘Be prepared to lose [your money].’”

Valentino Garavani was in a reflective mood. “I’m very proud, but not just because of the clothes I’ve created. I did lots of work with joy and with all my heart. I did my best and tried to please everyone. My advice to you all would be to believe, to appreciate what life gives you and try to be optimistic and just to be happy.”