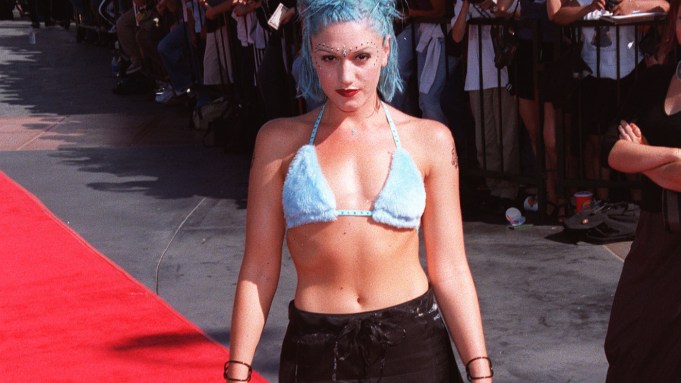 From influential punk-rock singer to becoming a fashion designer in her own right, fashion has been both a signature and a viable business for Gwen Stefani, who turns 50 on Thursday.

Upon hitting the music scene in the Nineties as the lead singer of No Doubt, Stefani became a source of fashion inspiration for the era with her pop-punk clashing prints, crop tops and random accessories, such as ties, arm warmers and layered belt chains.

In 2003, Stefani leveraged her unique style in the fashion world, launching her own label, L.A.M.B., in tandem with her first solo album of the same name. L.A.M.B. began as handbag collaboration with LeSportsac, expanding to apparel the following year with a debut runway collection full of leopard prints, plaid skirts and oversize pieces.

“It’s my passion and distraction from life,” Stefani said in an interview with WWD in 2004. “The music is so challenging, but the designing is just so much fun, and while both are creative in their own ways, when I sit down to do L.A.M.B., it’s therapeutic.”

As she embarked upon her solo music career in 2004, Stefani’s style evolved as she became captivated by Japanese Harajuku culture. She began putting her own punk-spin on classic Harajuku pieces, pairing tartan prints with colorful tulle skirts and accessorizing with oversize floral details. Stefani enlisted the Harajuku Girls as backup dancers and created pieces under her fashion label that centered on “Harajuku Lovers” with cartoon-like graphic images of the “Harajuku Girl” appearing on clothing and accessories.

At the time, Stefani experienced some criticism over her taking influence from Japanese culture. Comedian Margaret Cho, for one, blogged about the issue in 2005, calling Stefani’s use of the Harajuku Girls a “minstrel show.”

Despite the controversy, the line surpassed $100 million in sales in just three years on the market, later expanding into the eyewear, denim and innerwear categories in 2008. L.A.M.B. sold at high-end retailers and specialty stores, including Nordstrom, Barneys New York, Henri Bendel and Kitson in Los Angeles so successfully that fans began selling the products on eBay for more than $100 when the products themselves typically retailed for much less.

The singer has since switched design gears, partnering with Tura Inc. to create a collection of eyewear under the L.A.M.B. label in 2018. She has also dived deeper in the beauty world, collaborating with Urban Decay in 2015, signing on with L’Oréal Paris in 2011 and then becoming a Revlon global ambassador in 2017.

Today, “The Voice” judge’s look has gone toward more traditionally glam Hollywood. Click through the above gallery to see Gwen Stefani’s style evolution.

The Celebrity Fashion Looks That Went Viral in 2019 — So Far

A Brief History of Beyoncé at Fashion Week