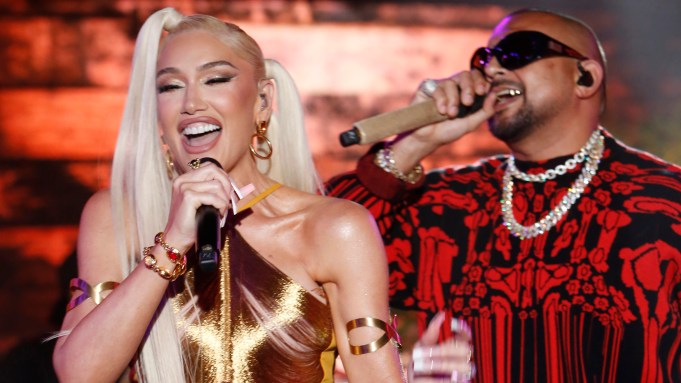 Gwen Stefani is promoting her song in style.

On Wednesday, the singer appeared on an episode of “Jimmy Kimmel Live!” to perform her new song with Sean Paul and Shenseea, “Light My Fire,” which dropped this week. She wore a metallic gold top by Cult Gaia paired with two-toned green cargo pants by Dion Lee and fringe boots by Collini Milano.

She styled her hair in high ponytails and kept her makeup simple with a bold cat eye look. She accessorized with gold jewelry including bangles on her arms. She was styled by Savannah Baker.

“Light My Fire” is part of Sean Paul’s eighth studio album, which was released in May.

For the performance, Stefani also wore makeup from her own beauty line GXVE. Pronounced “give,” GXVE is a reference to how she’s signed her name since high school, G with an X, which represents a kiss. The line launched on March 3 on its official e-commerce site and at Sephora, its exclusive retail partner, on March 10.

GXVE consists of eight products, priced between $21 and $48: an eye shadow palette in four color options; a pencil eyeliner in black and blue; two brow pencils in various shades; a skin care oil primer, and, of course, lipstick. Those familiar with Stefani’s career — and the always changing beauty looks she’s worn through her musical eras — know that one constant is her love of a bold cherry red lip. Now Stefani offers her own, a bright red lipstick in matte and satin, as well as a longwear matte liquid.

The brand is a partnership with Nikki Eslami, cofounder of Bellami, and New Theory Ventures, Eslami’s venture capital firm that invests in early-stage, women-led projects with a social purpose.