Gwyneth Paltrow and Zoe Tee have teamed up... Word has it Louis Vuitton has tapped Buzz Aldrin for an upcoming advertising campaign.... 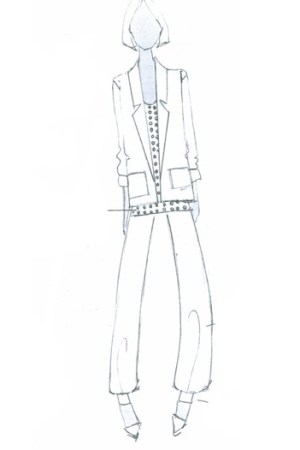 TEE’S TIME: Gwyneth Paltrow and French premium jersey maker Zoe Tee’s have teamed up to create a seven-look collection — called Zoe Tee’s Loves Gwyneth Paltrow — replete with styles for day and nighttime wear for fall. The fashions — crafted in fabrics such as cashmere blends, recycled cotton and wool mesh — are billed to be a mélange of Seventies glamour, rock inspiration and men’s casual suiting. A second collection is slated for spring 2010. All proceeds generated from the clothes will go to Kids Company, a charity Paltrow selected.

OVER THE MOON: Word has it Louis Vuitton has tapped Buzz Aldrin for an upcoming advertising campaign. According to a source, the legendary astronaut is slated to travel to a desert in the United States this week to be photographed by Annie Leibovitz. Aldrin, who made history as the second man to set foot on the moon, is expected to appear alongside fellow astronauts Jim Lovell and Sally Ride. Aldrin confirmed he’d been cast for the gig at a glitzy Omega cocktail during the Baselworld watch and jewelry fair in Switzerland over the weekend. It was held to commemorate the brand’s Omega Speedmaster watch series that was worn by crew members on the historic Apollo 11 mission in 1969. Also at the event, Omega ambassador Eugene Cernan, who was the last man to walk on the moon, asserted that the watch brand’s relationship with space travelers is written in the stars. “I can promise you that the first watch that will be worn on planet Mars will be an Omega Speedmaster,” he said.

AGE OF AQUARIUS: Look for plenty of Levi’s jeans onstage when the Broadway revival of “Hair” opens at the Al Hirschfeld Theatre on Tuesday night. Costume designer Michael McDonald has outfitted the entire cast in Levi’s product, in a nod to the denim maker’s impact on Sixties counterculture style. Among the Levi’s styles in the costume lineup are reissued vintage bell bottoms, Capital E Hesher fit jeans and 501’s — in the Acid Trip wash, naturally. And while a corporate backer of “Hair” might seem a bit like advertising in Pravda, Levi Strauss & Co. is also sponsoring the musical. “Our brand’s impact on the style and times of the late 1960s was a profound one, so the Levi’s jeans and ‘Hair’ relationship is an authentic, perfect fit,” explained Robert Hanson, president of Levi Strauss Americas.

LANVIN HIT: London wasn’t the only town feting Alber Elbaz last week. Barneys New York held a two-day trunk show of Lanvin’s fall collection. “It was a nice, uplifting, positive, good energy in the store,” said Barneys’ executive vice president and general merchandise manager Judy Collinson. While the store wouldn’t disclose the total sales at the trunk show, Collinson said bestsellers included a black wool dress with a gathered shoulder for $2,800, the Amalia quilted tote for $1,475 and the Happy python-cut leather bag for $1,965. Lanvin’s fur-and-knit pieces that can accessorize a dress or jacket also fared well, as did the ballerina shoes for $850 and wedge knee-high boots for $1,550.

HALSTON DEPARTURE: Atul Pathak, Halston’s vice president of marketing, has left the firm. Pathak, who moved to New York from London last year to join the company, exited the company two weeks ago during the Paris market. Pathak, who could not be reached for comment, is said to have resigned to return to his native England.