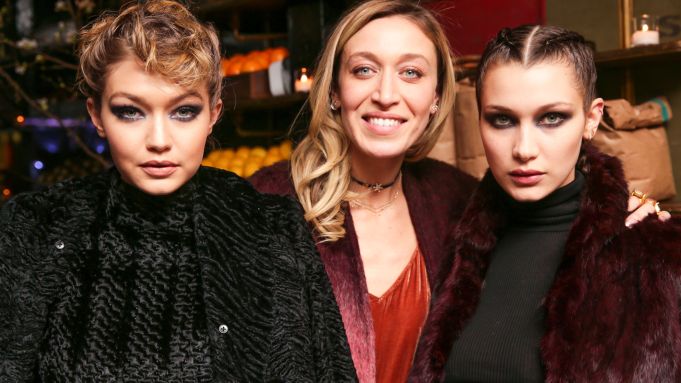 The Hadid family cannot be repressed.

Alana Hadid, the half-sister of Bella and Gigi Hadid, has teamed with her father Mohamed on a line of eyewear — aptly named Hadid Eyewear.

The line of sunglasses will be priced from $149 to $169, with travel-inspired style names like Passport Control and Frequent Flyer.

Alana Hadid said of the collection: “We both really love sunglasses — if you look at my father’s Instagram, he is wearing sunglasses in every photo. We both probably own 100-plus pairs. We are [pleased] to do something accessible to everyone. We wanted to keep [prices] at a point where if somewhere really loves them, they can buy them in all the colorways.”

An optical style, with clip-on sunglass attachments, will launch in March. Brick-and-mortar retail is being mulled for the future, but in the meantime, Alana feels the Internet is an apt retail outlet. “It gives a lot of people more access to buy all over U.S. and worldwide,” she said.

Five percent of all net sales will benefit the Vision of Children Foundation.

The elder Hadid sister keeps a low profile. Her Instagram following is by no means diminutive — 115,000 — but is relatively tame compared with those of her sisters, which both exceed 10 million. “When I’m with them, we usually order Postmates,” she said of family dining habits thanks to Bella and Gigi’s high profile. “It’s nice to have my own special voice,” she said of the line.

Over the weekend, Gigi and Bella utilized their notoriety for the better. The sisters took to lower Manhattan’s streets to protest against President Trump’s new immigration policies in Battery Park City. The girls — half Palestinian — held a sign that said, “We are all Hindus, Buddhists, Muslims, Atheists, Christians, Jews,” with a lettering arrangement that formed the mesostic, “humans.”