PARIS — Coronavirus lockdowns have proven to be rich periods of introspection for many, at times even prompting a realignment of values. And so it went for Halima Aden, who revisited her fashion career and concluded that it has not reflected her identity as a woman who wears a hijab. This, she plans to change.

The model took to Instagram to relay her personal journey — an exploration she said was spurred on by observations from her mother, whom she has been spending more time with.

Thanking Rihanna for letting her wear her hijab on a modeling set, Aden said “This is the girl I’m returning to. The real Halima.”

The model grew up in Minnesota after fleeing Kenya, as she explained through photos, frank messages and emojis — from cringing faces to hearts.

Tracing the good and the bad — her favorite school teacher got a mention while bullying classmates were called out — she noted that “being a minority within a minority is never easy.”

“Thanks to COVID-19 and the break away from the industry I have finally realized where I went wrong in my personal hijab journey.”

One of the images she singled out was a photo of her posing with a pair of jeans sitting on her head. 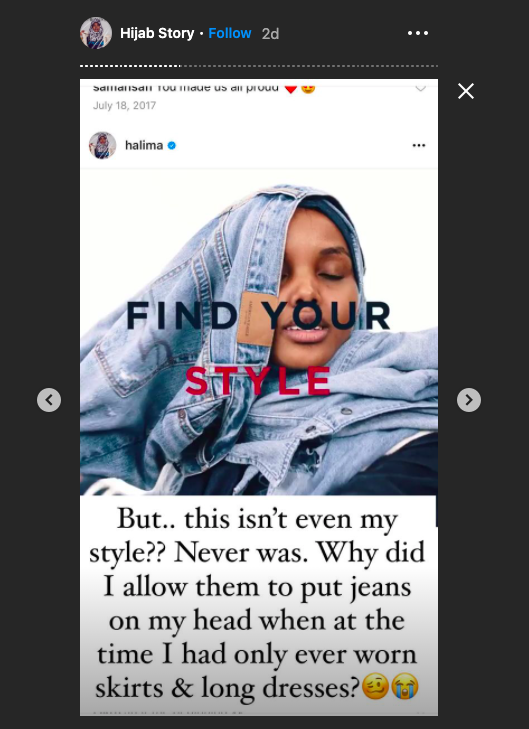 “Why did I allow them to put jeans on my head when at the same time I had only ever worn skirts and long dresses?” she wrote, suggesting she had been so desperate for representation that she lost touch with who she was.

Support from women friends was another theme running through her exploration.

“My hijab journey was the strongest when I was surrounded by my sisters. That’s a theme I’m just now discovering myself,” she noted.

Other images she singled out as not OK included one of her wearing a knit beanie hat and a scarf poking out from underneath, as well as one showing only her eyes, with bright yellow streaks of makeup on her lids.

Aden said she blames herself for straying from her values, but also the industry for the lack of Muslim women stylists.

“My heart literally can’t be whole while this industry continues to praise me for ‘modesty’ which even I was having so much internal conflict about…all the while still using and abusing other fellow sisters!! I’m taking a stand for myself but I’m also taking a stand for all the people who lost their soul to fashion. We will never need your representation.

“I remember wanting to be the ‘hot hijabi’ as if that didn’t just defeat the whole purpose. A hot mess is what it was truthfully,” she commented, in reaction to a photo that showed her in a bright yellow scarf, worn like a turban.

“This is where I went right! Getting to meet other fellow Hijabis doing remarkable thinks and breaking stereotypes,” she said, captioning a shot of her at the Etihad Training Academy holding hands with a woman wearing a uniform and a hijab.“ I was in the wrong part of the fashion Industry but I’m glad to know it’s not just runway shows and editorials. There’s so many brands today that are giving back and making REAL change,” she said.

“We gotta have these conversations in order to change the system truly. Nothing less, nothing more,” she said, noting she doesn’t plan to rush back to fashion.

“And yes I’m still gonna look cute!! Just in my own unique way,” noted the model.

Fashion’s Diversity Experts on How to Avoid Tone-Deaf Missteps