Up next for Mr Porter is an exclusive 13-piece collection from Raf Simons. 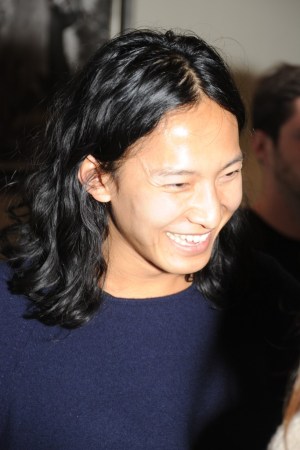 HANGING WITH WANG: Mr Porter took over the upstairs bar of Peruvian restaurant Coya in London on Monday night to celebrate its new collaboration with Alexander Wang. “This is our second season of working with Alex,” said Mr Porter buying director Toby Bateman. “We were talking to their team and the idea came about. It’s launching on June 4 and it’s nice to have a capsule from him available at a time when other shops will not have a lot of new stock, and nothing new from him.”

The designer arrived with his great friend Vanessa Traina; the pair had spent the day at the David Bowie exhibition at the Victoria and Albert Museum. “I sat in the part where they were projecting his concerts for ages,” said Wang. From London, they will head to Paris to work on Balenciaga which, said Wang, still feels like a dream. “Sometimes I want to pinch myself. Vanessa and I went to high school together and we’d go thrift shopping and cut up old jeans to turn them into skirts and things and, now, sometimes we just look at each other and say, ‘Can you believe this is happening?’”

Up next for Mr Porter is an exclusive 13-piece collection from Raf Simons, “designed around a floral print reworking the sweatshirt and Ts in bolder colors of pink and orange, alongside classic Raf staples including the Velcro fastening high top sneaker,” said Bateman.

Exclusive designer capsule collections are also regularly seen on Mr Porter’s sister site, Net-a-porter.com, which has launched a surf-inspired nine-piece capsule collection from Proenza Schouler based on the favorites of designers Jack McCollough and Lazaro Hernandez from past pre-spring collections.

“Capsule collaborations for us are very important because it’s a better story to tell,” Net-a-porter fashion director Holli Rogers told WWD. “We started the conversation with the Proenza boys in Paris last year because we want to support them; their collection is literally my favorite almost every season. And now that they’ve had an injection of investment, their deliveries are a lot better, so the timing was right.”