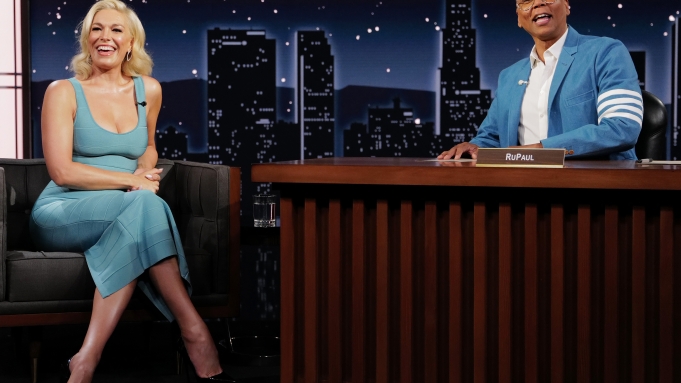 Hannah Waddingham knows that when it comes to fashion, there’s no need to reinvent the wheel to make a statement. The 47-year-old “Ted Lasso” and “Sex Education” actress stopped by “Jimmy Kimmel Live!” on July 24 to chat with guest host RuPaul, wearing a sky blue Hervé Léger dress for the occasion. Notably, Waddingham wore the same dress in a green color less than a week ago while attending the Emmy FYC screening of “Ted Lasso” on July 18.

The sleeveless bandage dress featured a rounded neckline, a mid-calf hem and a slit at the back that extended to the mid-thigh. She paired the dress with a pair of six-inch black patent leather heels with an exaggerated arch. She was styled by Cristina Ehrlich.

Waddingham accessorized the look with a statement cocktail ring and drop-shaped earrings by Vhernier. Waddingham wore her shoulder-length hair in a curled style with elegant side-swept bangs. Her makeup centered around blushed cheeks and a black-lined lid.

During her appearance on “Jimmy Kimmel Live,” Waddingham talked to RuPaul about her recent Emmy nomination for “Ted Lasso,” the value of the show’s optimism and her role in the upcoming “Hocus Pocus” sequel. Waddingham also talked about singing “Never Gonna Give You Up” by Rick Astley in a “Ted Lasso” funeral scene, even receiving a special videotaped message from Astley during the guest spot.