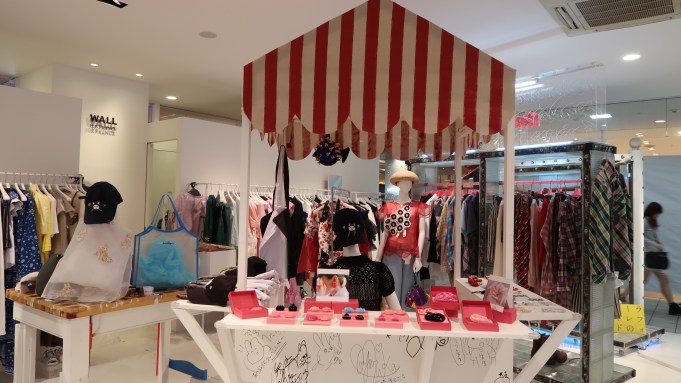 The shop is located front-and-center on the ground floor of Harajuku youth mall Laforet. Its convenient location and dynamic merchandising has made it a key stockist for Japanese designers looking to make a mark on Tokyo’s youth culture while also reaching connected, style-inclined tourists. Sources say that the shop’s taste, reputation and prime location have made Wall as important a Tokyo stockist as Isetan’s Shinjuku location.

Laforet is a popular after-school destination for fashion-hungry Tokyo teenagers, who bop about its floors in an eclectic mishmash of vintage, fast fashion and reconstructed wares. Wall — under the umbrella of select shop conglomerate H.P. France — is located just inside Laforet’s doors. While the shop opened in 2008, it was moved to this plum location approximately 18 months ago, effectively making Wall “the face of LaForet,” said buying director Kyoko Mashiko.

She took over the shop’s buying and merchandising four years ago, also overseeing the assortment at Wall’s locations in Fukuoka and Osaka.

In the process, she’s helped support a new league of Japanese designers who are currently bubbling up in studios across Tokyo’s more remote, working class neighborhoods.

Labels including Mikio Sakabe, Jenny Fax, Written Afterwards and Tambourine sit among objets by designers like Noriko Nakazato, patterned socks by Osaka label Nonnette, and an expo of contemporary jewelry from across Japan. While most items have the sweet undertones native to Harajuku, they also exhibit signs of Tokyo’s new preference for clothes that are more tomboyish and rough-around-the-edges. Most items are priced under $1,000.

Laforet’s layout is akin to many malls in Japan. While shops are individually operated they are not barricaded by walls and doors — as is typical in Western shopping. This open floor plan makes Wall that much more visible to the mall’s visitors.

Also, the store completely changes face every two weeks. “Young people are in here every day and we want to keep it fresh and exciting for them,” Mashiko said of the shop’s merchandising logic. Displays can include tiny circus tents, neon signage and castaway furniture.

Wall is member to the H.P. France select shop portfolio, which includes 86 boutiques spread across Japan, New York and Paris.

Said H.P. France chief executive officer Takanao Muramatsu: “Harajuku is one of the iconic districts where young people are eager to gather. Many creations have started from Harajuku and fashion from Harajuku continues to develop Japan’s fashion culture. For that reason, Wall has a responsibility. We created Wall as a platform to show Japan’s creativity in fashion, especially up-and-coming talents.”

Designers consider Wall’s location a contributor to its blue-chip status — as many luxury department stores are located in tony districts far from youth centers like Harajuku.

The shop’s independent, design-focused structure also adds to its growing reputation. Sources say that because Wall is independent and does not report earnings each quarter, it buys more envelope-pushing merchandise. Designers say that Wall’s seasonal buys optimally represent their visions.

Muramatsu touched on this: “Wall is able to show merchandise which department stores don’t carry because it’s too progressive for their market. This is one of Wall’s strengths.”