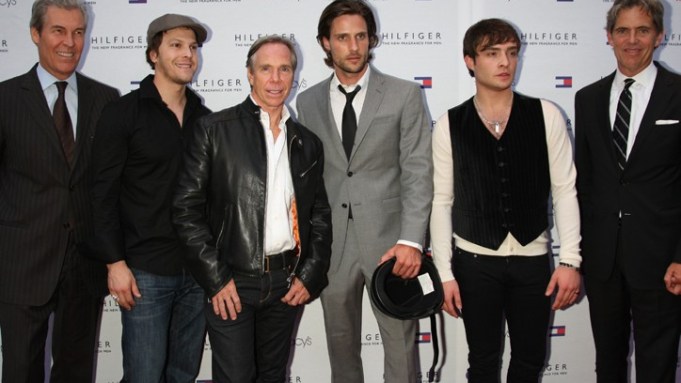 Gunning his Harley, Tommy Hilfiger roared up to Macy’s Herald Square Tuesday night at the head of a pack of bikers to mark the launch of his new men’s fragrance and the rollout of his collection of men’s and women’s sportswear.

While it wasn’t quite the world famous Sturgis motorcycle rally in South Dakota, Hilfiger was one of 17 riders to pull up at the store as part of a motorcade of Harley-Davidsons — complete with police escort — that included Tommy Dunn, the model for the fragrance’s ad campaign, and 10 riders representing GQ magazine, one of the party’s sponsors.

The bikers had departed from Lincoln Center, where the designer’s show is scheduled to be held at 6 p.m. Thursday, and took a planned route across Central Park South, down Fifth Avenue, across 57th Street and then down Broadway.
Once inside Macy’s, which has the exclusive for distribution of the sportswear in the U.S., Hilfiger and singer Gavin DeGraw signed bottles of the new scent, called Hilfiger, and DeGraw’s CDs, while Dunn signed a few motorcycle helmets for gear heads at the event.

“This brings back a lot of memories of when we were launching our first fragrance and went on a multicity tour,” Hilfiger said from the dais during a break in the more than hour-long autograph session. “I haven’t really done it in at least eight years. But it’s really exciting meeting our customers — it’s great to feel their energy.”

DeGraw, a self-professed motorcycle fan, said, “I used to live next to the Hell’s Angels clubhouse on Third Street. Maybe that seeped into my psyche. It was awesome, it was so loud — that was my alarm clock.”