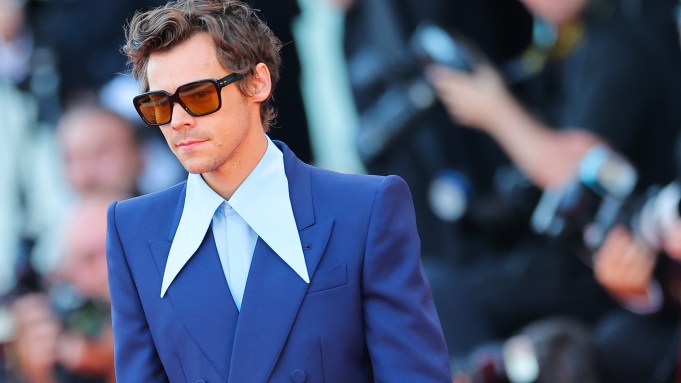 Harry Styles has made his Venice Film Festival debut.

On Monday, the Grammy-winning singer attended the premiere of his much-anticipated movie “Don’t Worry Darling” wearing a look by Gucci. The ensemble featured a double-breasted navy suit over a powder blue button down with an exaggerated collar paired with white boots from his Ha Ha Ha collection in collaboration with the Italian luxury fashion label.

He topped off the look with custom rings and orange lens sunglasses.

Styles was styled by Harry Lambert, who has also dressed him for his concerts, editorial shoots and music videos. Lambert also works with the likes of Emma Corrin, Iris Law and Barry Keoghan.

Styles’ arrival has been long-awaited as his fans and movie enthusiasts have been looking forward to watching “Don’t Worry Darling,” directed by Olivia Wilde, in which Styles plays the lead role opposite Florence Pugh.

The psychological thriller tells the story of Jack and Alice Chambers, a young couple living in the 1950s in Victory, California, a town that has been created and paid for by the company Jack works for. Alice becomes curious about her husband’s line of work, which causes tension between the couple and their seemingly utopian lives.

The film, which premieres in theaters Sept. 23, also stars Nick Kroll, Chris Pine, Sydney Chandler, Gemma Chan and even Wilde herself, all of whom play supporting roles and joined Styles and Pugh on the red carpet.

The 79th edition of the festival is taking place until Saturday, and will debut some of the year’s most-anticipated films, such as the biographical drama on Marilyn Monroe “Blonde,” “The Whale,” “The Son,” “White Noise” and “Bones & All,” among others.