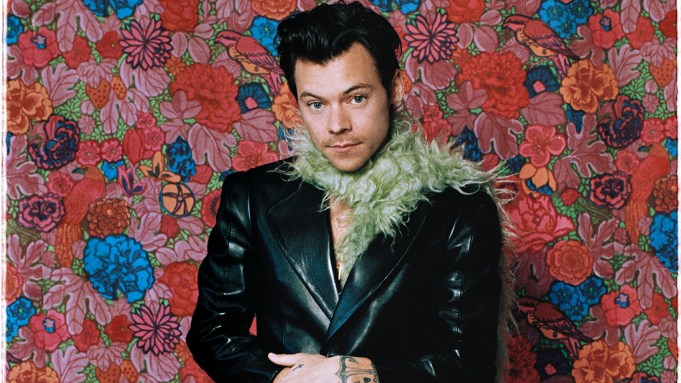 Harry Styles has released yet another fashion-forward music video.

This week, the Grammy-winning singer dropped a video for his hit song “Late Night Talking” from his new third studio album “Harry’s House.” The clip shows him bed-hopping from one location to another, noticeably wearing Gucci pajamas in some of the scenes, which includes a moving train, a theater stage and the streets of London.

According to an Instagram account for Styles’ outfits, the first one is a custom pajama set with a long-sleeved collared shirt and matching pants in pink, with tan polka dots by the Italian luxury fashion house, which he wore with baby blue calf socks.

For the music video, which was directed by duo Bradley Bell and Pablo Jones-Sole, known professionally as Bradley & Pablo, Styles was styled by Harry Lambert.

“Harry’s House” was released in May and was met with immediate commercial and critical acclaim, with a number of songs dominating the popular song charts.

Over the years, Styles has worked very closely with Gucci and its creative director Alessandro Michele by wearing the label’s custom designs for some of the biggest events of the year, including his own concerts.

Last month it was revealed that Styles and Gucci would collaborate to create a collection called Ha Ha Ha.

“He has an incredible sense of fashion, he is obsessed with clothes,” Michele said at the time. “He keeps sketches and an archive, he could easily be a stylist or a designer and is very free, representative of this new generation that is interested in so many things. I have been observing his ability to combine items of clothing in a way that is out of the ordinary compared to the required standards of taste and common sense and the homogenization of appearance.”

Every look in the capsule, which will be in stores in October, merges the distinctive style of both men, with a ’70s vibe that fits well with the rest of the clothes and accessories on sale at the “Cavalli e Nastri” vintage store where Gucci staged the presentation — reflective of Michele’s and Styles’ shared passion for vintage clothes.