The label has debuted a 15-piece line for girls aged two through ten years, which spotlights swimsuits, cover-ups, tops and dresses. 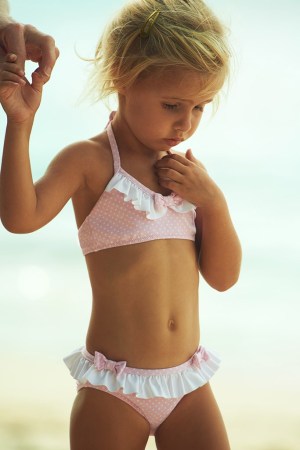 BEACH BOUND: The luxury London swimwear brand Heidi Klein is dipping its toe into beachwear for girls. The label has debuted a 15-piece line for girls aged two through ten years, which spotlights swimsuits, cover-ups, tops and dresses in patterns such as nautical stripes, gingham checks and polka dots. Penny Klein, who co-founded the label together with Heidi Gosman in 2002, said the range was prompted by Gosman being unable to find “beautiful, quality beachwear” for her own daughter. “She wanted something that [her daughter] Maddie could swim and run around in, that would keep her from burning and also look gorgeous,” said Klein. She added that a boys’ range is also in the pipeline for next year, along with jewelry for women and girls and a line of sandals for women.

Prices for the girls’ line start at 45 pounds, or $72 for a bikini, one-piece or rash vest and rise to 50 pounds, or $80 for a cover-up. The line launched Oct. 15, with Harrods as the exclusive U.K. stockist, along with Heidi Klein’s two London boutiques and its online store, heidiklein.com. In the U.S., the girls’ line will be exclusive to Saks, where it launched today.