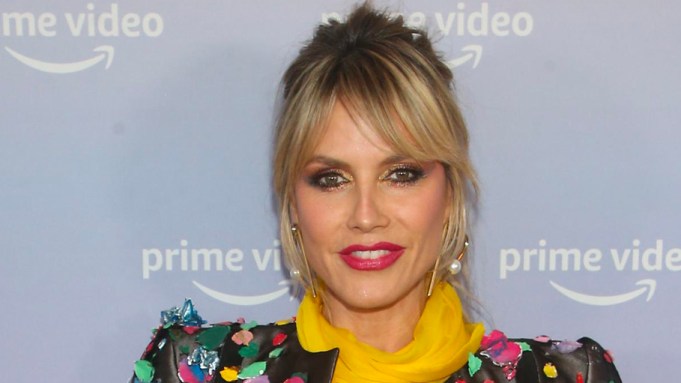 The look consisted of a black, rainbow floral-embellished jacket over a bright yellow blouse paired with a white floral miniskirt. She paired the couture outfit with green satin Christian Louboutin heels, a white Jeffrey Levinson bag and jewelry from Retrouvai and Established.

It was announced this April that “Making the Cut” would be returning for its third season. The fashion competition show, similar to Klum’s previous long-running show, “Project Runway,” brings together 10 fashion designers for a chance to win $1 million to invest in their business. The winner will also receive mentorship from Amazon Fashion and will create a co-branded collection for Amazon Fashion.

Klum and her former “Project Runway” partner Tim Gunn are the competition’s hosts, as well as the show’s producers. The third season will see Moschino creative director Jeremy Scott and designer Nicole Richie return as judges. A release date for the “Making the Cut” third season has not yet been revealed.

Klum posted photos of herself on Instagram from the party with the caption: “Excited for season three of @makingthecuttv this summer. Love you @andrea_pittercampbell…who will be the next to win 1 million dollars?!”

Take a Look Inside “Making the Cut” on Amazon