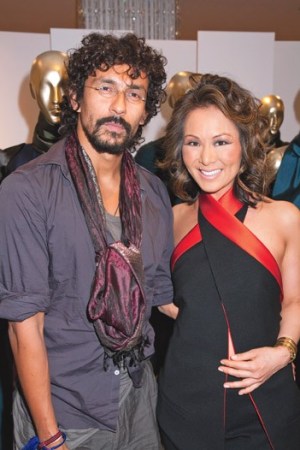 HELLO, HAIDER: Haider Ackermann is probably one of fashion’s hottest commodities right now, and on Tuesday, Saks Fifth Avenue customers and a smattering of socialites got a chance to meet him at a cocktail reception hosted by CNN reporter Alina Cho. “Saks had a very specific idea of the Haider girl so I put together a list,” Cho said of the night’s co-hosts Julie Macklowe, Coralie Charriol Paul and Cristina Cuomo. They, and guests like Josie Natori, swooned over the designer and his fall collection on display. “He is one of the best colorists I have seen in a long time,” said Ron Frasch, Saks’ president and chief merchandising officer.

As for Ackermann, the designer seemed to enjoy being the center of attention in New York. He was particularly impressed by the CFDA Awards, which he attended on a whim after Anna Wintour asked him to join her that day, even though he thought he was underdressed. “Everybody was in black tie, except for me,” he said. “Me and maybe Olivier Theyskens.”

This story first appeared in the June 9, 2011 issue of WWD. Subscribe Today.

THE MORNING AFTER: Naeem Khan spent much of Wednesday fielding phone calls and e-mails after Michelle Obama wore one of his gowns to Tuesday night’s state dinner for German Chancellor Angela Merkel. Asked about the reaction, Khan said, “You have no idea. It’s fantastic. The thing is my name is already out there. I am not just starting out in life. This enhances what I have worldwide — Indonesia, Japan and the Middle East — not just in America.”

Khan, who has dressed Obama for five public occasions, said, “For her to give designers the liberty to design how we feel is so great. It makes you want to do your best for her. She also has a very conscious feeling about fashion.”

He said the sleeveless, glittery ivory gown she wore this week was designed a few months ago exclusively for the First Lady and was sold — albeit wholesale — to Ikram Goldman. The two style-setters have since parted ways and Obama is said to now have a few people helping her — “no one stylist,” Khan said.

NEW HOME: De Grisogono, the Swiss jewelry and watch firm, got a big lift Tuesday with the reopening of its 2,800-square-foot shop on the southwest corner of Madison Avenue and 69th Street in Manhattan. A spark in a window display last December ignited a fire destroying the store.

“It’s been rebuilt exactly as it was,” Fawaz Gruosi, owner and founder of de Grisogono, told WWD. “It was a big loss,” though some business did shift to de Grisogono’s outpost in Bergdorf Goodman.

Gruosi said he’ll be touting the store’s reopening with a party there tonight, and thereafter moving the company forward. He’s considering a shop in Bal Harbour Shops, the luxury center in Miami.

As far as business overall, he acknowledged it will be a few years before it returns to prerecession levels. “It’s improving everywhere, and is much better for us in Europe, though it’s not like it used to be,” Gruosi said. “We haven’t returned to the point of 2006 or 2007. We are realistic. We are controlling expenses.”

ART WORK: Exploring Christian Dior’s arty connections is a new exhibition at Les Rhumbs, the late designer’s childhood home in Granville which is now a museum. “Dior, the Artists’ Ball” gathers archival Dior creations as well as pieces by the likes of Elsa Schiaparelli and Paul Poiret. Numerous illustrations, photos and memorabilia from artists including Cecile Beaton, Christian Bérard, Raoul Dufy and Giorgio de Chirico are also on display in the exhibition, which explores the influence of art on Dior’s designs. Dior named a number of his frocks after artists, like Dali or Braque. The show runs until Sept. 25.