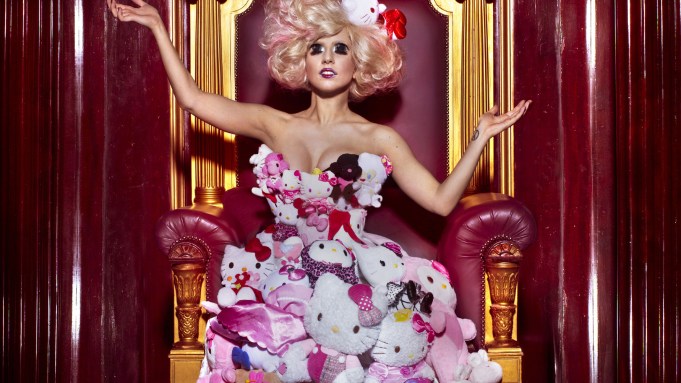 HELLO KITTY SEATTLE-BOUND: Having been stamped on a myriad of products including commercial aircraft, soy sauce and stationery, it seems fitting that Hello Kitty is about to get its first large-scale museum retrospective in the U.S..

Seattle’s EMP Museum will launch “Hello! Exploring the Supercute World of Hello Kitty” on November 14 to coincide with the character’s 40th anniversary. In what will be a timeline of sorts, the show’s assortment will include the first Hello Kitty telephone and other vintage products from the Seventies and Eighties as well as more contemporary ones, such as the one-of-a-kind Hello Kitty dress once worn by Lady Gaga and a couture bustier worn by Katy Perry, as well as diamond jewelry and a Hello Kitty talking robot.

Organized by Sanrio, the global lifestyle company that is widely known for its Hello Kitty products, and the Japanese American National Museum, the show will examine the character’s colorful history and her influence on popular culture. Museumgoers are meant to get a product-based historical and sociological view through 600 rare and unique pieces from Sanrio’s archives. There will also be an installation of more than 40 mixed media works by contemporary artists to reflect the influence of Hello Kitty on their work, including Gary Baseman, Kazuki Takamatsu, Kozyndan, Osamu Watanabe and Simone Legno for Tokidoki. When the exhibition winds down on May 15, Sanrio plans to take the show to other museums in the U.S.

Record-breaking crowds turned out for its first run at the Japanese American National Museum in Los Angeles. The exhibition was co-curated by Christine Yano, author of “Pink Globalization: Hello Kitty’s Trek Across the Pacific,” and Jamie Rivadeneira, founder and owner of pop culture-inspired boutique JapanLA.