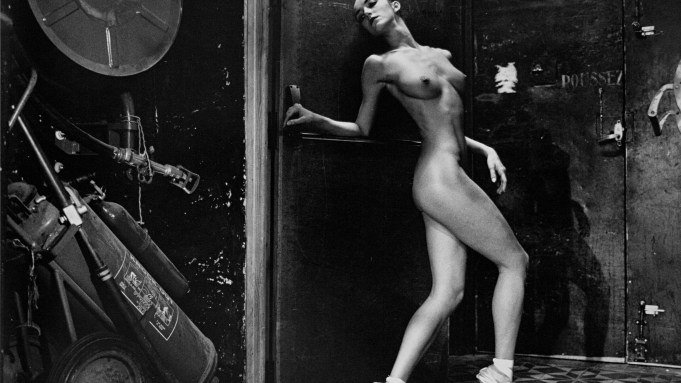 “He hated the idea actually,” recalled Philippe Serieys, who worked as Newton’s assistant between 1982 and 1992 and who now runs his own press agency, ZPO, in Paris; Serieys was in Berlin for the opening of the exhibition and, because he worked on many of them, he introduced the series of pictures. “He told me: ‘My god, I am not a ballet photographer.’ But he didn’t have any choice because the princess asked him.”

The princess in question was Caroline of Monaco, now Princess of Hanover, who knew Newton through their mutual friend, Karl Lagerfeld, who also had a home in Monaco at the time. She asked Newton if he could take pictures of the ballet dancers for the company’s catalogues and other promotional publications.

“The first time we went there [to shoot the dancers], he didn’t have any idea what to do,” Serieys continued, “which was unusual. Because he always had an idea, he would keep notes about his ideas — but in this case he didn’t know.”

So for the first shoot, a lot of the pictures were taken inside the company’s practice rooms. “But you can see the evolution every year,” Serieys noted.

The following year Newton took the dancers outside and started posing them differently, outside landmarks he knew well, like the Monte Carlo casino. Some of the poses he first tried with the dancers would be re-created with fashion models.

“That’s the thing he did love about working with the dancers,” Serieys explained, in front of a photograph highlighting the skeletal backbone of a ballerina in front of a mirror. “Their bodies, their muscles and the light on the muscles. I had to change the lighting on this one about 10 times!”

“These pictures really give a different perspective on Newton’s work,” Matthias Harder, the director of the foundation and curator of the show, said. “We only received the vintage silver prints of the Monte Carlo Ballet earlier this year and I decided to get this mostly unknown body of work up on our walls as soon as possible, as the core of this group show,” he told WWD. The prints had been stored at the Newtons’ home in Monte Carlo, where Newton’s wife, June, still lives, and will become part of the foundation’s huge archive, around two-thirds of which is fashion related.

Also on display in Berlin until May 10, 2020, are works by 12 other photographers, including Robert Mapplethorpe, Inez & Vinoodh, Cindy Sherman Juergen Klauke, Yang Fudong and Barbara Probst, among others. The foundation was loaned these works from private collections and galleries. And whether it’s about the theatrical presentation and role-playing, the way subjects are posed, the focus on musculature and altered bodies, the nods to erotica and fashion or about the personal relationships between the artists, all of the exhibitors have some connection to Newton and his work.

Possibly the most impressive offering comes from Italian performance artist Vanessa Beecroft. Pictures and film document Beecroft’s 2005 work, “VB55,” in one of the larger rooms in the foundation’s headquarters. “VB55” featured 100 women, clad only in pantyhose sitting and standing around in the impressive Mies van der Rohe-designed Neue Nationalgalerie in central Berlin. “The women were somehow simultaneously naked and dressed, which picked up on Helmut’s own work, ‘Naked and Dressed,’” Harder explained. “It was about how the nakedness was received, and then how that reception was received.”

And no, he had not been overly preoccupied about contemporary sensitivities around inclusiveness and body shape when curating the show, foundation director Harder told WWD — that is, the kinds of sensitivities that have potentially made it less acceptable to worship at the altar of the improbably perfect human form, as Newton was sometimes accused of doing. “If we didn’t show something, because we felt we were not allowed to, then that would be bad,” Harder said. “That would be censorship. So we don’t follow those kinds of rules.”