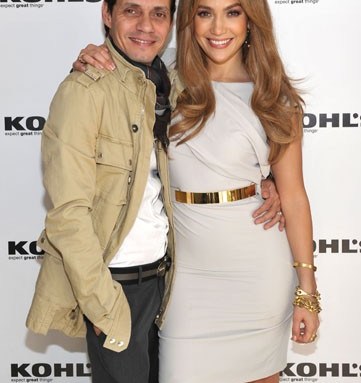 HERE’S THE NEWS: J.Lo and Marc Anthony turned out at a press conference on the rooftop of The London hotel in Los Angeles on Thursday afternoon to unveil their new deal with Kohl’s Corp., which will see them introduce men’s and women’s fashion collections, and potentially expand rapidly to other categories, including home. The deal confirmed a front-page exclusive report in WWD Thursday. We would have liked to have reported on the press conference, but Kohl’s “disinvited” our reporter after the story appeared. Here’s a picture of J. Lo and Anthony at the event, though.

MEN’S ROOM: Paris is burning on the men’s wear front, with a slew of designers poised to join the next fashion week, from Jan. 20 to 23. Alexandre Plokhov, who shuttered his Cloak label in 2006 and did a three-year stint at Versace, said he plans to launch a signature collection and has rented a Paris gallery to unveil it. Another New York-based designer, Yigal Azrouël, is angling to show his men’s collection on a Paris runway. European names are also muscling onto the calendar, with iconic Left Bank brand Arnys plotting its first runway outing, and Thierry Mugler presenting the first men’s collection by Romain Kremer under the artistic direction of Nicola Formichetti. Finally, rumor has it Maison Martin Margiela is also mulling its first runway show for its men’s wear.

FASHION ICONS: Guests walking into the party Wednesday night celebrating the opening of Tommy Hilfiger‘s new store on the Champs-Elysées in Paris were greeted by portraits of two of the designer’s fashion icons, James Dean and Grace Kelly. But the celebrities present had some quirky style heroes of their own. In the case of French actress Lou Doillon: Edie Bouvier Beale, one of the subjects of the cult documentary “Grey Gardens.” “The documentary proves that clothes matter, even to a woman who never leaves the house,” she said. “This idea that putting a skirt on your head with a brooch will make you feel better — that’s what being a fashion icon is about.”

Elisa Sednaoui has been seeing plenty of a more contemporary fashion icon, Karl Lagerfeld. Having shot Chanel’s fall eyewear campaign, she will accompany the designer to Moscow later this month for the launch of the Pirelli calendar, which he lensed and she features in. Sednaoui said her inspirations were her mother and actress Tilda Swinton, for her androgynous style. “Somehow, you can make the relationship with Tommy, too, because his clothing could have this casual masculine-feminine side to it that I like,” she noted, saying Hilfiger’s boyfriend sweaters were particularly appealing.

Emmanuelle Béart revealed she has recently wrapped three movies, including “Bye Bye Blondie,” helmed by controversial author and filmmaker Virginie Despentes. But when it comes to fashion, she refuses to take direction. “I don’t have any fashion icons. I follow my desire, my evolution as a woman, my maturity, my transformation,” the 47-year-old said. Later, Hilfiger headed to the Left Bank, where he hosted a dinner at Lapérouse sandwiched between his rocker buddy Lenny Kravitz and French actress Isabelle Huppert.

QVC FOR THE ROYAL-MINDED MASSES: In response to the frenzy over Kate Middleton’s engagement, QVC will be selling a cost-friendly $39.54 replica of her engagement ring, designed by Kenneth Jay Lane. Dubbed the Kenneth Jay Lane Princess Simulated Sapphire Ring, the bauble will debut on QVC Saturday at 8 a.m. EST, and be available on qvc.com.