Hermès Is Having Another Viral Moment With This Chinese TV Drama

Remember Samantha Jones used Lucy Liu's name to jump the queue to get a Birkin bag in “Sex and the City?” China now has a version of its own.

A screenshot of the hit Chinese TV drama “Nothing But Thirty,” featuring a group of wealthy housewives and their Hermès Kelly and Birkin bags.

LONDON — A clip from the hit TV drama series “Nothing but Thirty” went viral on Chinese social media over the weekend — and proved how Hermès rules the handbag hierarchy among wealthy consumers.

The clip featured the show’s main character, Yao Tong, carrying a Chanel limited-edition 2.55 flap bag from 2017 to a social gathering, where the rest of the wealthy housewives came with Hermès Birkin or Kelly bags. After the gathering, they took a group picture together but Tong later found out she got cut out from the pictures that those housewives posted on WeChat Moments.

A few fashion influencers first shared the clip shortly after the episode was aired, and it soon caught the attention of the wider online audience for its realistic depiction of Chinese social hierarchy and socialites’ obsession with Hermès.

Mrs. Li, the leader of the group, who stood at the center of the picture with her Himalaya Niloticus Crocodile Birkin, valued at $370,000, comes from old money. Those who carried leather variations of Birkin or Kelly bags around her are her friends who are less wealthy. Mrs. Wang, second on the left, who carried a purple crocodile Kelly bag, is the new money in the group, and she brought Tong to the gathering to meet the other ladies for potential business collaborations.

Tong, whose family runs a tobacco company, soon realized she carried the wrong bag to the gathering and hid her Chanel bag behind her back during the group picture. Afterward, she used her connections to get a hold of a Kelly bag in three days’ time so that she could be accepted by the others at the next gathering. 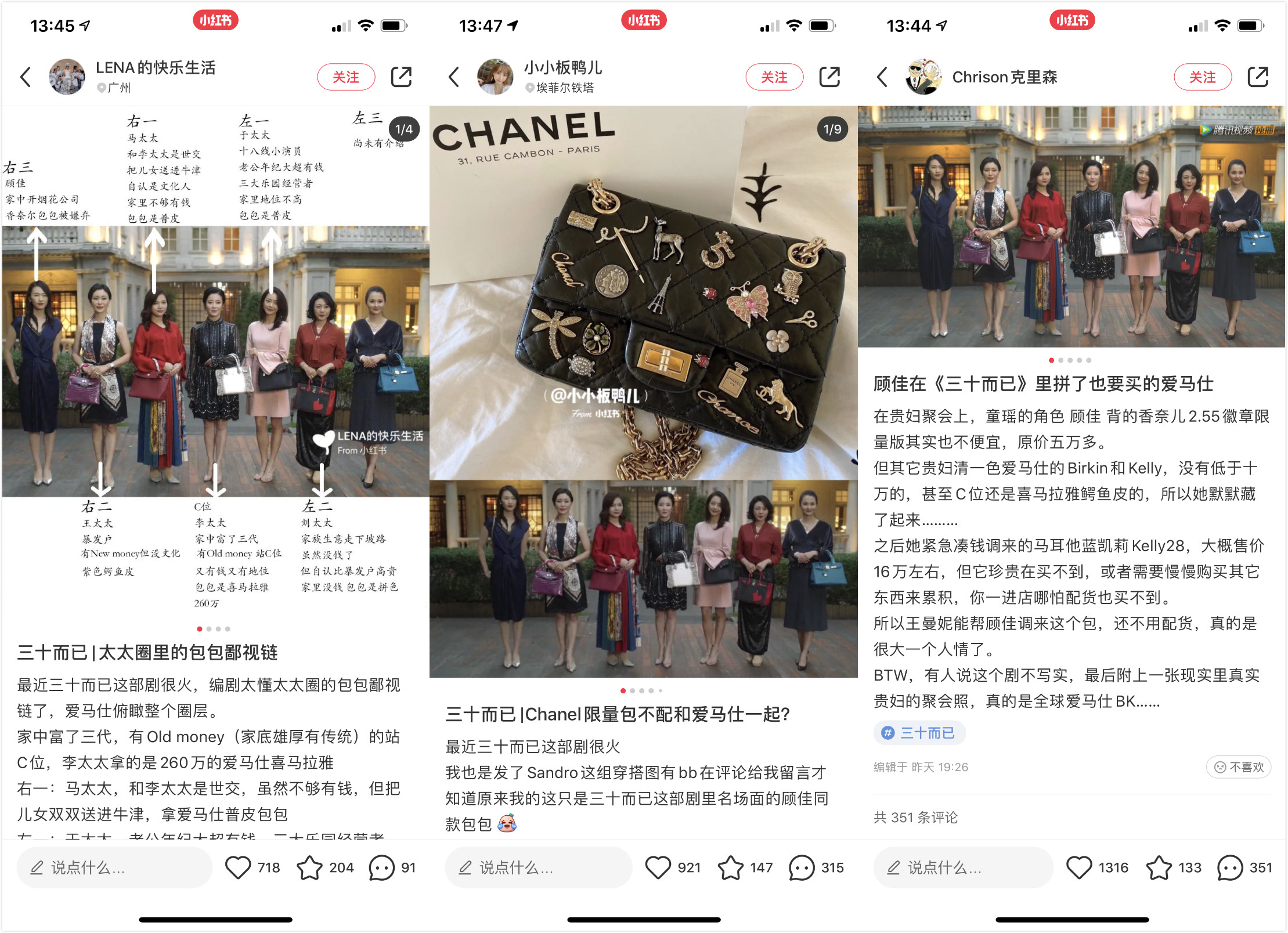 Hermès once again becomes the center of online discussion for the hit TV drama “Nothing but Thirty” prominent depiction of Birkin and Kelly bags.  Screenshot

Chinese fashion lovers are living for this show, as this is the first time in recent memory that a Chinese TV series has portrayed a fashion moment so accurately. If one searches Hermès on Weibo, WeChat, Xiaohongshu or Douyin, one finds many discussions about the series and the bags, and how to buy them if you have enough money.

Inspired by an old text “At thirty, I had planted my feet firm upon the ground,” from the “Analects of Confucius,” the TV series centers on the emotions and pressures of urban women turning 30 years old in China, as they leave behind their youthful, carefree 20s to embrace the “adult” life.

Hermès Hauled in $2.7 Million in One China Store on Saturday: Sources

Former Hermès Staff in Counterfeiting Ring to Be Sentenced in September