Hermès opened its Wanderland exhibition dedicated to flânerie, or the act of wandering the city streets and drinking in the details of everyday life. 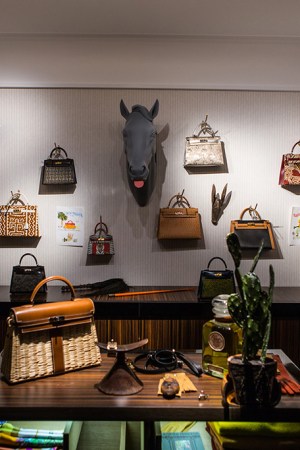 A WALK ON THE WILD SIDE: Hermès is taking a trip — to nowhere in particular — with an exhibition that opens today dedicated to flânerie, or the act of wandering the city streets and drinking in the details of everyday life. Wanderland will run until May 2 at the Saatchi Gallery in London, and move to Paris in September, Turin, Italy, in December and China next year.

Hermès has dedicated 2015 to the theme of flânerie and transformed an upper floor of the gallery into a series of whimsical and surreal settings across 11 rooms. One features vintage walking sticks — including one for the dandy, with a built-in bit of chalk for cleaning the collar and a brush for dusting down the suit — while another is filled with graffiti created by the artist known as Cept, and another with floor panels that “talk” when a visitor walks on them. A café dedicated to lost objects features little tables inset with pocket watches or tiny paint boxes that, on closer inspection, feature film screens the size of postage stamps. A pillbox and glass bottle on one table glow with psychedelic colors while the image of a lady dances at the bottom of a coffee cup.

Objects have been taken from the Hermès archive, the museum collection of Emile Hermès at 24 rue du Faubourg Saint-Honoré in Paris and Hermès’ contemporary collections and displays have been created from a variety of media.

Pierre-Alexis Dumas, artistic director of Hermès, loves the buzz and beauty of London, and could not resist opening the show there. “Paris would have been the obvious choice, but London is the ideal city for the 21st century flâneur. There is something happening here,” he said.

Dumas said his aim was to create an exhibition that would embody “what wandering is about. My hope is that people come to the show, maybe forget reality, and then look at their own city with new eyes. We must never lose our ability to dream, to wander, to go with the flow and let ourselves be surprised.”

The exhibition was created by Bruno Gaudichon, curator of La Piscine-Musée d’Art et d’Industrie in Roubaix, while the set designer was Hubert le Gall. The brand has also created a book of kooky collages with Actes Sud that reflect the rooms and objects on show. Dumas said the show is also a meditation on the act of creation, and hopes it will awaken visitors’ empathy, so they can “think about the world we live in, and feel the presence of those who made the objects.”