Hermes’ Smart Car… Uniqlo’s Warm Up… McQ Prints It Out…

HOP IN HERMES: Hermès on Thursday unveiled the tiny Smart car it designed to celebrate the vehicle’s 10-year anniversary. 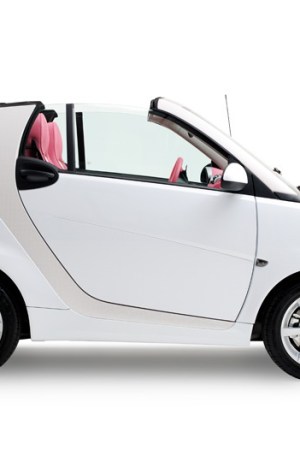 HOP IN HERMES: Hermès on Thursday unveiled the tiny Smart car it designed to celebrate the vehicle’s 10-year anniversary in the contrasting setting of the enormous Grand Palais. The Fortwo édition Toile cars, manufactured by the Como group, are available in 10 colors including gold, indigo and the luxury house’s signature orange. Each is fitted with Hermès leather-covered steering wheels and gear levers, with colors including fuchsia and lime, along with the brand’s original canvas toile H. A fleet of Smart cars along with acrobats on stilts welcomed guests while Hermès artisans were hard at work demonstrating their craft on the car’s interior. Visitors could also take a chauffer-driven ride in one of the vehicles. The cars, starting at 38,000 euros, or $48,564 at current exchange rates, went on sale last week.

STAR TOUR: Thanks to Carrie Bradshaw, Sarah Jessica Parker can always be relied upon as a formidable voice of fashion, literally. Parker will be the voice for the Metropolitan Museum of Art’s new audio guide tour on “Costume: The Art of Dress.” In the first audio guide by the Costume Institute, and available at the museum from Nov. 25, Parker will guide visitors through approximately 20 pieces of art from the permanent collection, including costumes depicted in paintings and sculptures. Parker taped the audio tour in a recording studio in the summer. “Looking beyond our encyclopedic collection of costume to the museum’s other treasures puts clothing into a historical context,” Costume Institute curator-in-charge Harold Koda said. “Walking through the galleries listening to Sarah Jessica Parker’s narration will bring a sense of discovery and delight to the experience.”

UNIQLO COMES OUT OF THE COLD: Uniqlo’s upcoming promotion for Heattech, a line of thermal innerwear, sounds like something out of a science fiction movie. On Nov. 18 at Military Island in Times Square, a team of Heat-Techies dressed in silver bodysuits will be scanning pedestrians with a thermograph that reveals the coldest parts of the body. The consumers can then walk over to a giant human vending machine that dispenses free products. Press of a button for men’s or women’s clothing sets in motion models inside the machine, who dance a choreographed routine and dispense a package of Heattech innerwear. Uniqlo is investing $1 million worldwide in the marketing effort with similar events scheduled to take place in London, Paris, Beijing and Seoul. “In Japan we sold 20 million units last year and the plan is to sell 30 million this year. We’re ordering over 200,000 units for the SoHo store,” a spokeswoman said.

PRINTS POP AT MCQ: Alexander McQueen’s McQ diffusion line planted a pop-up showroom in London’s Soho Thursday to launch the label’s spring collection. The spring line — which is filled with slouchy silk tiger print T-shirt dresses, pink and black gingham shirts and optical print leggings in clashing colors — was displayed in a street-level store, allowing curious passersby to wander in alongside press to preview the collection. The company has previously shown the McQ line at fashion weeks in New York and Milan since it launched in 2006, but opted to unveil it during a showroom setting this season. In addition to a host of printed pieces — such as a white silk bubble-hem skirt printed with black and pink feathers — the line also spotlights sharply tailored black jackets, ultraskinny jeans and harem pants. There are accessories too, such as leather hold-alls and feather print silk scarves. Prices for the line range from 80 pounds, or $126, for a T-shirt through to about 420 pounds, or $663, for a leather jacket.