The luxury firm held the event in a wood filled with performance artists. 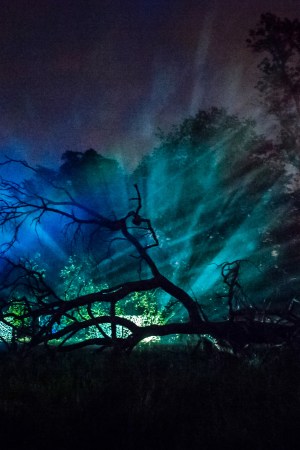 STRAWBERRY FIELDS: Hermès embarked guests on a magical mystery tour for the party celebrating its 2016 theme, Nature at Full Gallop.

Attendees were instructed to meet at an address on the eastern edge of Paris, where they boarded buses for an unknown destination. Some 40 minutes later, they arrived in Ermenonville, a small town best known for its 18th-century garden, home to the grave of French philosopher and nature lover Jean-Jacques Rousseau.

Guests were handed bottles of mosquito repellent before heading into the park, which is designed to resemble a natural environment with minimal human intervention. “Are you in touch with your inner berry?” asked a blue-jacketed attendant, wielding an oversize strawberry-shaped lollipop.

Things became even more psychedelic from there. Dotted throughout the forest were dancers, performers and musicians. Some played single-note music, others sang haunting songs, while a woman in a tutu randomly grabbed passersby and made them gallop through the woods.

It was all part of an elaborate performance directed by Frederic Wake-Walker, artistic director of Mahogany Opera Group and head of Mica Moca Project in Berlin, whose previous productions include “Lost in Thought,” billed as the world’s first mindfulness opera.

Dinner was held under a semi-open tent with tree stumps serving as seats, as an orchestra played live music. The menu, devised by Michelin-starred chef Alain Passard of L’Arpège restaurant in Paris, featured vegetables from his kitchen gardens served in hollowed-out loaves of bread.

Pierre-Alexis Dumas, artistic director of Hermès, said Rousseau saw nature as synonymous with harmony. “To reconcile ourselves with nature is to become reconciled with ourselves and with the world we live in, which is the home of humankind. This was Rousseau’s dream and this is also what we stand for at Hermès,” he said.

“Once upon a time and at the beginning of Hermès, there is nature. Nature always, nature only, nature as an ideal, an ally and everlasting source of inspiration. May we learn to cherish and nurture our love of nature, for this is the essence of our house,” Dumas added.