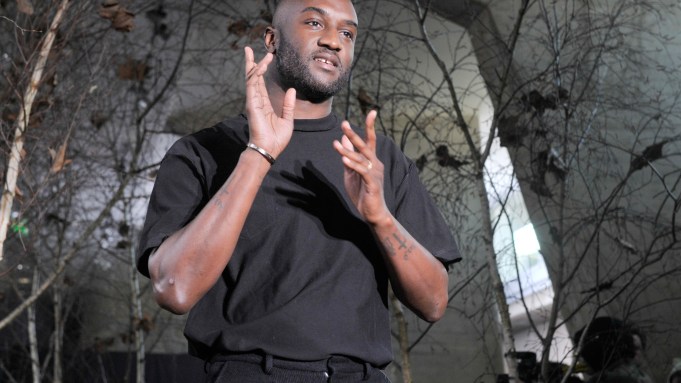 SQUAD GOALS: Rappers, designers, rapper-slash-designers, and a Formula One driver-slash-R&B singer were among the polyvalent personalities who turned out to see Off-White’s fall 2017 collection for men.

Shaking hands and hugging as they trickled in, the front row crowd seemed to embody the tribal spirit that is a key value of streetwear labels like Off-White.

Designer Heron Preston — who has also been a DJ — said he was getting ready to present the first collection for his new label in a Paris showroom Friday.

“Paris is the ultimate fashion stage, so I had to do it here.” said the former Nike staffer who — like Off-White’s creative director Virgil Abloh — has worked on Kanye West’s Yeezy brand.  He said the new collection would be “almost unisex,” with leather jackets, hoodies, sweatpants, and denim. “Today was the first time I actually went [to the showroom], so now the ideas are starting to come together for the first time.”

A$AP Bari, a founding member of the A$AP Mob hip-hop and fashion collective, was also plotting his own Paris show for next men’s week in June.

“Hopefully, if make the deadline I can do it then,” said the designer and producer, whose VLone label staged a pop-up store at Art Basel Miami last December.

Bari reminisced on his teenage years when he first got interested in fashion.

“It comes from just growing up in Harlem, growing up in New York and taking my talents downtown,” he said. “Going to Supreme, skipping school.’

Hamilton said he will receive a new car from the factory next month. In addition to getting ready for the upcoming season, the British racer said he was staying busy with various smaller projects in TV and music.

“I try to dibble-dabble,” he said. “I want to learn and experience as much as I can.”

“The collective is the new designer,” said fashion influencer Luka Sabbat as he looked out at the crowd. “It’s definitely a whole squad.”

Sabbat said he was preparing a gallery show to open in February at Milk Studios in New York, featuring photos by him and his friend Noah Dillon.

The social media star, whom the New York Times dubbed the “coolest teenager on the Internet” last April, said he was also excited to see Haider Ackerman’s first show for Berluti the next day.