The weekend pop up hosted "Can Fashion Save the World?" panel with Preston, Alonzo, DSNY's Bridget Anderson and designer Nicole McLaughlin.

NEW YORK — Sustainability is a hot topic in fashion and one that Heron Preston and other executives took on during a panel discussion at the Depop Live pop-up in SoHo over the weekend.

With the irreversible effects of climate change looming over the world, the fashion sector is under pressure to reduce its environmental footprint and remove the shame of being labeled the second most polluting industry after oil. Although that label has been dismissed as fake news, indisputable figures show it is nonetheless a pressing issue that should not be taken lightly.

Bridget Anderson, deputy commissioner of recycling and sustainability at the New York City Department of Sanitation, shared a 2017 study that said 200,000 tons, or 400 million pounds, of textiles and clothing are discarded every year in New York City alone.

Everybody World cofounder Iris Alonzo took the claim further, using T-shirts as an example. “A T-shirt is half a pound, so in theory that’s 800 million T-shirts.”

Anderson said the city spends $100 a ton to throw textiles into a landfill.

The hourlong session, entitled “Can Fashion Save the World,” was hosted by the peer-to-peer shopping app and was intended to raise awareness among the Gen Z audience, whose members account for the majority of Depop’s 13 million active global users — 5 million of which are in the U.S. About 90 percent of the app’s active users are under 26 years old.

“By virtue of existing as a resale market, we are helping, but there are so many other things we can do,” Depop chief executive officer Maria Raga told WWD following the panel. “We’re at the end of the chain because it’s the upcycle, but we need to go to the beginning.”

Raga said Depop is helping young designers such as NoSesso at the start of the production cycle by providing financing, as well as awareness through its platform.

“We want to be more involved in helping those designers produce environmentally friendly collections so that we can close the cycle,” said Raga, who herself is part of Gen X. “We share the same passion about individuality, diversity, sustainability — and we’re extremely inclusive.”

The London-based Depop recently raised $62 million in Series C funding to expand in the U.S. Raga said the plans are in their early stages, but she sees a possible return of Depop Live. “It has the potential to go to other cities in the country, but we have to see how it goes,” she said.

While Raga can speak to the end of the product cycle, Preston and Nicole McLaughlin can speak to the beginning. McLaughlin is a Reebok alum who recently stepped down from her graphic designer role at the company to focus on her upcycling project. The designer repurposes soccer, volleyball and tennis balls into slides; Reebok caps into shorts; Columbia sport jackets into joggers, and even foam fingers and Gatorade bottles into chairs. 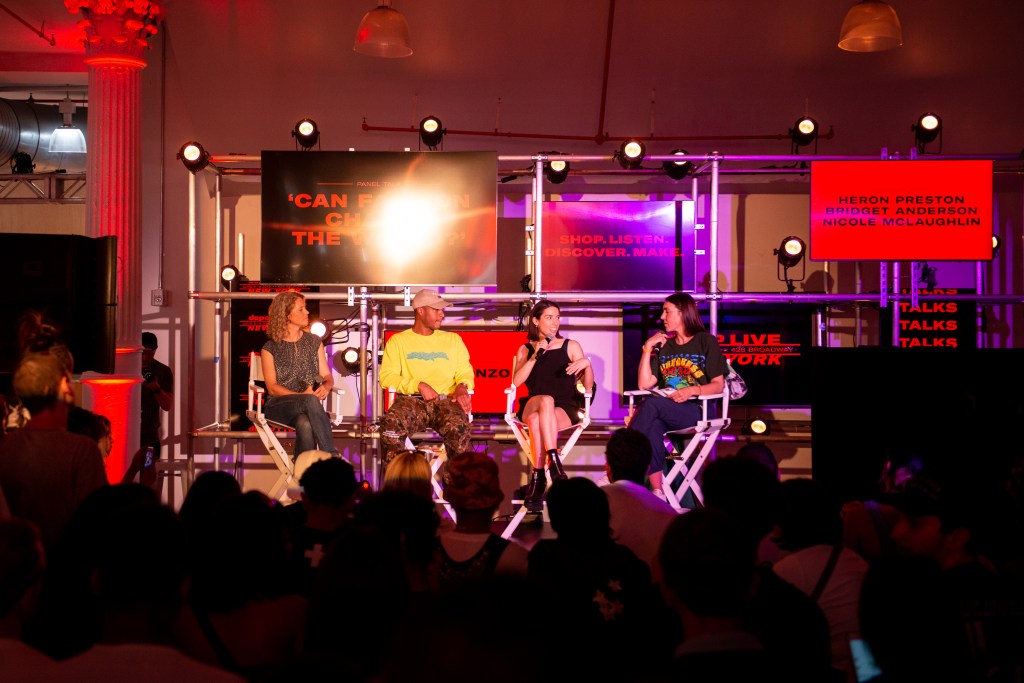 “I got this inspiration to get off of the computer, use my hands, and create something,” McLaughlin said after the panel. “I would go to thrift stores and try to find something that I could make something new out of. This inspired my philosophy to be more sustainable and I adopted being sustainable into my practices as a designer, because there’s so much to be done here.”

Preston, who partnered with DSNY on a collection in 2016, helped paint a picture of the production process, which he describes as a “complex landscape.”

“The biggest problem is in the production of your clothes,” he explained. “Once you start to scale and sell a lot of T-shirts around the world, you really want to start to challenge what kind of cotton am I really using? We can say we’re using organic cotton, but is that organic cotton that’s being grown and mixed with conventional cotton?”

It begins at the farm, with the growing of the plant, followed by the process of removing seeds, spinning yarn, adding tags, labels, stickers and packaging, transportation, in-store presentation, and finally where the product goes when the buyer no longer wants it.

“Every single one of those steps can be considered as a designer,” he said. “It really comes to questioning the factories that we’re working with and really challenging them to change because that’s really how it starts — asking these questions that designers weren’t really asking in the past and really investigating our supply chain as well.”

Asked after the panel who bears responsibility for education, McLaughlin said, “It’s both. I think it comes from the corporations that have reach where they can educate the people, but it also comes from us as consumers being conscious of what we buy.

“The younger generations are a lot smarter,” she added. “They want to feel involved in something as a community, and they want to stand for something. It becomes a relationship and it comes from within and from us wanting to be part of a better future. I’d say [the responsibility] is more on us than them, but [corporations] need to be able to provide the resources and to be able to listen to us.”

In regards to sustainability in the industry, Anderson has an outsider’s perspective. “As sanitation, we’re the mirror of consumerism. What people throw away is the reflection of what people consume,” she said. “I think it’s getting better. Most of the mega-businesses have a sustainability platform and people want to see sustainability as part of their business and so I think that that’s helping to shed light and add attention to the issue. Since 2011, we’ve reclaimed 10 million tons of clothing from what would’ve been in the trash, so it’s making a difference, and it also saves us money as a city.”

Depop Deconstructs Its Success and Strategy