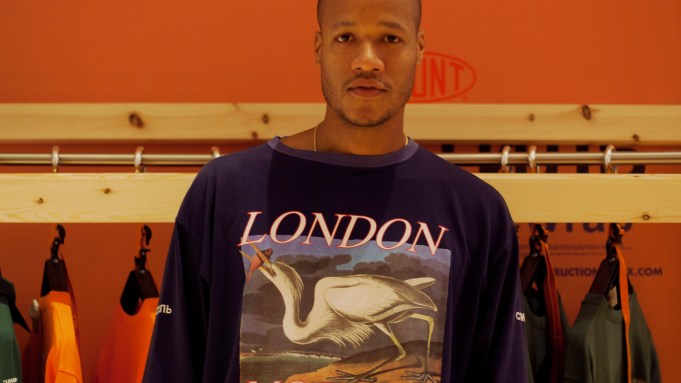 HELLO, HERON: Heron Johnson’s retail tour, which debuted in Moscow, touched down in London Friday at Selfridges, which is carrying his range exclusively.

“I’ve always been a creative and an ideas kid,” said Johnson. “I’ve always done things and kind of figured things on my own. I grew up in San Francisco as a skateboarder and we’re super obsessed with style. I think that played a huge part and my life in New York being a style capital and my friends were cool as f—. Just all of that influenced my aesthetic today.

“I wanted to go on this tour because I want to feel connected with the community within all of the cities,” he explained. “So I can introduce myself and it feels like a meaningful experience for people that I’m selling my collection to. I think that’s [what] was special about the launch of this collection: that [it] actually…connects with people.”

A former art director for Kanye West — where he designed tour merchandise — Johnson worked at Nike and was also a part of the Been Trill art and DJ collective with Virgil Abloh and Matthew Williams.

The designer collaborated with the Department of Sanitation in New York for his DSNY range, which is a part of the first drop at Selfridges. After an unsuccessful attempt to source uniforms, he approached the department and received donated uniforms from 59 stations across New York City. His range consists of a jacket, sweatshirts and hoodies with the logo DSNY placed on the sleeve. He deconstructed the orange, yellow and gray worker vests onto a tote bag. Prices range from 35 pounds or $44 to 860 pounds or $1,095.

“It started off as like an art project,” said Johnson. “I wanted to shine a positive light on sanitation workers, service workers and just the work that they do. Without them we wouldn’t be able to live in the cities that we live in. It’s all about emphasizing sustainability.”

Johnson was drawn to the concept of uniforms as his father was an officer of the San Francisco police force. “The uniform was always around,” he said. “I remember playing with his technical belts and try on his uniforms so I think that’s how I become obsessed with uniforms.”

Born and raised in San Francisco, he moved to New York to study at the New School’s Parsons School of Design where he launched a blog about New York and eventually met Virgil Abloh. His blog caught the eyes of a publisher and together they created “The Young and Banging,” a yearbook-style tome that featured Polaroids of cool kids in New York.

Johnson linked up with Williams and Justin Saunders on Been Trill which led to clothing as well as a pop-up. When Abloh started Off-White and Williams launched Alyx, Johnson focused on his label and joined New Guards Group, a Milan distributor working with labels including Off-White and Palm Angels.

He hosted his first presentation during Paris Fashion Week which he called “For You, the World” which featured sweatshirts, hiking pants, bomber jackets and bags.

Johnson will head to Pitti Uomo in Milan to DJ Abloh’s party, followed by visits to Paris, New York, Tokyo and South Korea.