Tod’s chairman Diego Della Valle brought a healthy dose of Italian charm to Tokyo. Also, Tommy Hilfiger says he would like to dress up Michelle Obama. 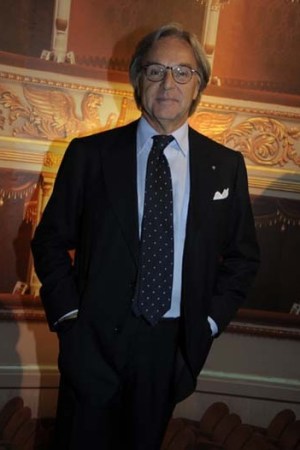 HIGH NOTE: Tod’s chairman Diego Della Valle brought a healthy dose of Italian charm to Tokyo Tuesday night, when he hosted an event to promote the group’s new partnership with La Scala. Celebrities including ballet dancer Yasuyuki Shuto and actress Hisako Manda mingled at the brand’s Omotesando flagship. Top fashion editors then moved to a nearby restaurant, Two Rooms, for an exclusive dinner. Della Valle expressed his admiration for the country — despite its less than encouraging economic situation. “If I were 30 years old, I’d come here for a few years,” he said. “It’s a civil place, full of energy. I like it a lot. There’s a nice culture of elegant living.”

Tod’s La Scala celebration is currently on the road to Beijing, where the brand will stage a theatrical performance and host a large event for both press and celebrities on Friday.

H&M ON THE RUNWAY: Lanvin will stage a fashion show in New York on Nov. 18 showcasing designer Alber Elbaz’s creations for Swedish fast-fashion retailer Hennes & Mauritz, including some one-off customized outfits that will be sold for charity afterward. The event, to be held at The Pierre hotel, will come a day before the opening party for a new H&M unit at the Forum Shops at Caesars in Las Vegas, where the collection will go on sale on Nov. 20 ahead of the rest of the world.

The customized clothes will be put up for auction online after the New York show, with proceeds going to Unicef, a spokeswoman for H&M said. The “Lanvin loves H&M” collection designed by Elbaz and Lanvin men’s wear designer Lucas Ossendrijver spans clothing, jewelry, hats, sunglasses, handbags, footwear and even lipstick. It will arrive in 200 stores on Nov. 23.

H&M has been building anticipation for the holiday selling event by drip-feeding videos featuring Elbaz on social networking sites and YouTube. A short film by “Leaving Las Vegas” director Mike Figgis is due to be posted on H&M’s Web site on Nov. 2.

TOMMY WANTS A TURN: Tommy Hilfiger had a message for First Lady Michelle Obama on Wednesday night: He’s available to dress her. Hilfiger issued the offer to the First Lady at a charity fashion runway event to benefit the National Capital Chapter of the National MS Society. As honorary co-chair of “Fashion’s Fight Against MS” event, hosted by Shannon Rusbuldt and ModelsHotel at the Washington Club here, Hilfiger lent his time and capsule collection runway show for a cause he has championed for more than 20 years and knows firsthand because his sister suffers from it.

“I’d like to dress her up,” he said of Obama. “She leans toward my casual clothes. I don’t think she knows I make dressy, formal clothes.”

Michaele Salahi, who first rose to fame, or maybe infamy, when she and her husband, Tareq, crashed a White House dinner and is now a “Real Housewives of D.C.” star, knows what it’s like to dress up in Hilfiger’s clothes. Salahi, who also recently revealed her secret battle with multiple sclerosis, glided down the runway in the designer’s fashions. Hilfiger is on a whirlwind tour, promoting his new fragrance and opening new stores around the world. Next year, Hilfiger’s sights are on Asia.

“I’m opening stores all over China and India right now,” he said, adding that he has about 1,100 stores worldwide and will open a total of 100 stores by year’s end.