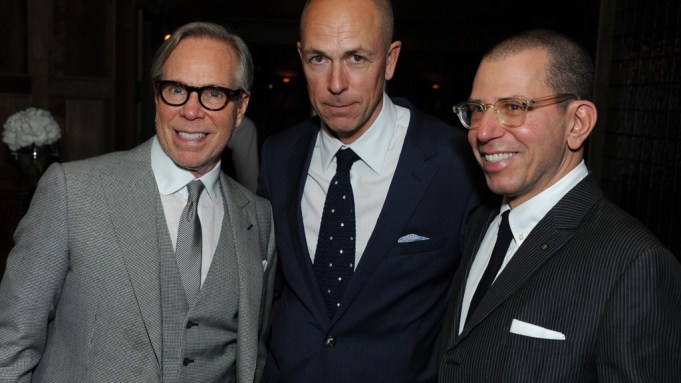 HOUSE PARTY: “I offered to buy her a diamond, but she wanted a cake,” said Sir Philip Green, who conjured an 11th-hour birthday confection for a guest at the dinner cohosted by Jonathan Newhouse and Tommy Hilfiger during London Collections: Men on Monday.

Guests including Dee Ocleppo Hilfiger, Ronnie Cooke Newhouse, Tamara Beckwith, Giorgio Veroni, Eliane Fattal, Jack Guinness and Robert Konjic gathered at Little House in Mayfair to toast the men’s shows — but by the end of the evening they were all celebrating Elizabeth Saltzman’s birthday.

Green offered to buy Saltzman the big, flower-shaped diamond jewels right off the ears of the designer Fattal — who was sitting at his table — but the birthday girl opted for cheaper fare. “So I made a call to a place around the corner,” Green explained. One hour later, a strawberry-filled cake with thick icing ablaze with candles rolled into the dining room.

Tommy Hilfiger, who was decked in a three-piece micro-check Timothy Everest bespoke suit, said he was in London briefly for shows. He attended the Kent & Curwen presentation — and also managed to squeeze some good meals in, too, including “lunch at Zuma and dinner at Amaya,” he said. He was headed to Amsterdam and later to Italy.