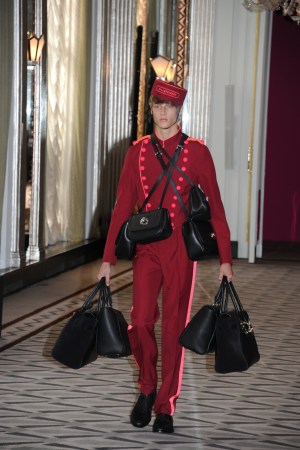 MY PRETTY PONIES: Designer Emma Hill unveiled Hill & Friends on Sunday with a sumptuous breakfast in the Claridge’s ballroom and a parade of pink, print and a pair of lively ponies.

The event, where models dressed as bellboys carried her bright, punchy bags on silver trays around a table piled high with pink food, marked Hill’s return to fashion after leaving the creative helm of Mulberry in 2013.

The show also featured Hill’s nine-year-old son dressed as a bellboy riding a luggage trolley, and two much less well-behaved miniature Shetland ponies, who broke into a canter mid-way through their stroll around the room and raced backstage, dragging their obliging walker behind them.

The high-energy Hill, who loves her animals, even had a hot pink shovel at the ready in case there were any more surprises.

“Life’s too short – we wanted to offer up a bit of fun,” said the designer, who showed six styles in various combinations. The bags feature a signature lock at the front that’s shaped like a smiley face, with clasps for eyes. When the bag is locked, the eye appears to be winking.

The bags come in bright leather, leopard-print hair calf, and patchworks of the two, and in styles ranging from clutches to weekend bags, all with bonded suede linings. Colors range from neon pink and electric green to “school uniform” shades of navy, toffee, and oxblood.

“There’s a sweet spot in the market for luxury product at these prices,” said Hill. “A thousand pounds is still a lot for a bag, but today people are more and more concerned about provenance, and it’s important that these are made in England.”

Hill has big plans for the collection, part of which was available to buy onNet-a-Porter.comimmediately following the show.

Asked what other categories she wanted to move into, Hill responded. “The lot! We’ll definitely do ready-to-wear – not tomorrow, though – and we will do anything that makes sense for the business.” A Christmas capsule collection is already in the pipeline, as are small leather goods.