The presidential opponents have been unabashed about their clashing political opinions, but they tried to relay calm in their conservative attire. 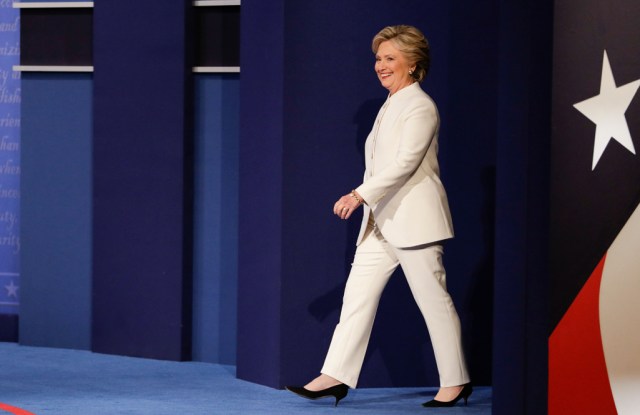 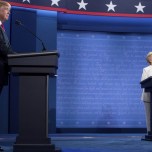 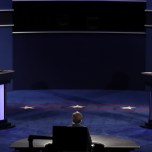 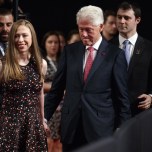 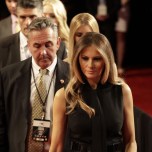 DRESSING THE PART: In what has been a knockdown, dragged-out election season, Hillary Clinton and Donald Trump showed up for Wednesday night’s presidential debate dressed to impress.

For the third consecutive presidential debate, Hillary Clinton went with a Ralph Lauren Collection cream-colored wool crepe curved-front jacket with horn buttons and matching wool crepe pants, a marked change from the navy one with a dove-gray lapel she wore for her last war of words with Trump earlier this month. The Democratic frontrunner also wore a vibrant red pantsuit for the first debate at Hofstra University on Long Island.

Lauren is one of numerous New York designers who have extended their support for the former Secretary of State. Diane von Furstenberg, Tory Burch, Elie Tahari, Joseph Altuzzara and Prabal Gurung are among the others, as well as foreign-born non-eligible voters like Georgina Chapman and Rag & Bone’s Marcus Wainwright.

Trump, meanwhile, turned up in a dark Brioni suit and red necktie of his own, fielding questions from moderator Chris Wallace. A Trump spokeswoman said Wednesday night his suits are Brioni and he always wears one of his own ties.

Donald Trump chose Brioni and Hillary Clinton opted for Ralph Lauren for the final debate before the 2016 presidential election.  Harnik/AP/REX/Shutterstock

Until she sat down with CNN’s Anderson Cooper Monday night to defend her husband, Melania Trump had locked up the role of “candidate’s spouse least likely to appear in a TV interview.” But with her model looks and designer wardrobe, the Slovenian-born Trump is not to be overlooked. Her choice of a hot pink Gucci pussy bow blouse and cigarette pants at the last debate sent the Internet into overdrive. On Wednesday, she opted for a Ralph Lauren “Sheryl” black jumpsuit, choosing an American designer for the first time at one of the debates. She added a wide black belt to the look.

Trump’s daughter Ivanka appeared in a one-shoulder black strapless top by Tibi and pants, accessorized with black suede block-heeled $120 Emalyn sandals and a $195 black Mara cocktail bag, both from her signature collection. During an interview earlier in the day at Fortune’s Most Powerful Women Summit in Laguna Niguel, Calif., The Donald’s eldest daughter doubled as her own brand ambassador, wearing an embellished $148 sheath dress and $150 Hallee sandals in “lite latte” leather from her label.

Both sides showed their true colors for their respective candidates. While the political pundits parse every last line of the debate, the fashion critics are no doubt ready to have their say, too.