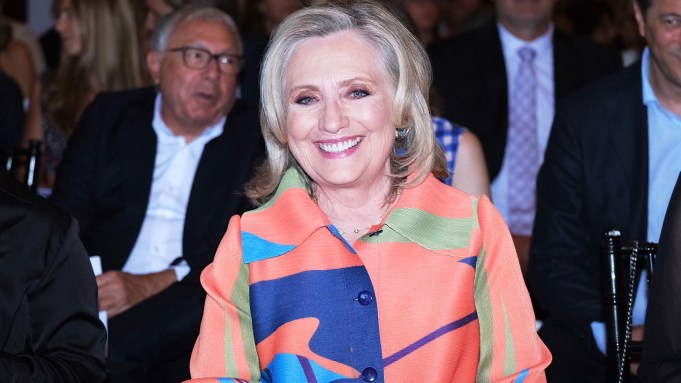 Hillary Clinton was among the attendees at the DVF Awards hosted Thursday night during the Venice Film Festival.

The awards ceremony, which was hosted by fashion designer Diane von Furstenberg, was held in Venice for the first time and was the 13th edition of the annual event. Clinton, fresh off her red carpet appearance during the premiere of “White Noise” on Wednesday during the opening night of the Venice Film Festival, was among the night’s honorees.

Clinton wore a multicolored loose-fitting dress for the occasion.

The former secretary of state, first lady and presidential candidate attended the DVF Awards on behalf of Vital Voices Global Partnership, an organization she founded in 1997 whose mission is to invest, connect and amplify women leaders taking on the world’s greatest challenges.

Among those honored during the night was director Ava DuVernay, who received the Inspiration DVF Award. This year’s Lifetime DVF Award went to Christine Lagarde, the president of the European Central Bank.

The DVF Awards were founded in 2010 by von Furstenberg and the Diller-von Furstenberg Family Foundation to recognize and support women who are dedicated to transforming the lives of other women. This year, honorees received $100,000 with their awards, which is double the prize that was previously gifted in past years.