The Clinton campaign today unveiled a T-shirt collection aimed at raising funds for her presidential run and the designers involved are some of the same who backed President Obama in 2008 and 2012.

Dubbed “Made for History,” the limited-edition collection includes a T-shirt with an image of Clinton’s face in red, white and blue designed by Marc Jacobs, a “Make Herstory” T-shirt from Maxwell Osborne and Dao-Yi Chow of Public School, and a T-shirt emblazoned with “Women’s Rights and Human Rights” in rainbow colors designed by Tory Burch.

“My support for Hillary is grounded on our long-standing shared belief in equality,” Jacobs said in a quote posted on Clinton’s campaign Web site alongside his T-shirt, which is selling for $45. “I am proud to share this T-shirt as a champion of equal rights, for the progress we have made and for the hope of continued progress with Hillary as president.” 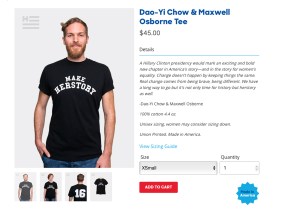 Chow and Osborne said a Clinton presidency would “mark an exciting and bold new chapter in America’s story — and in the story for women’s equality.”

“Change doesn’t happen by keeping things the same,” the duo said. “Real change comes from being brave, being different. We have a long way to go, but it’s not only time for history, but ‘herstory,’ as well.”

The Burch shirt was inspired by “a colorful tribute to a seminal moment for women’s equality, when Hillary Clinton traveled to Beijing and proudly declared, ‘Women’s rights are human rights,’” according to a description on Clinton’s Web site.

The fashion industry, which galvanized around Obama in the general elections of 2008 and 2012, now appears to be putting its support behind Clinton, who lost to Obama in the 2008 primaries.

A contingent of 22 fashion designers worked to support Obama’s reelection bid in 2012 as part of a campaign dubbed “Runway to Win.” Jacobs and Burch joined several other designers, including Jason Wu, Narciso Rodriguez and Alexander Wang in creating merchandise to sell products for Obama’s second presidential run.

Clinton now appears to be capturing the hearts of the fashion industry and is raising the ante in the support from the fashion world in her bid against Sanders for the Democratic nomination.

Sanders picked up an endorsement from Shepard Fairey, the street artist and activist behind the “Hope” design used during Obama’s presidential run in 2008. Sanders’ campaign unveiled a T-shirt designed by Fairey on Thursday. 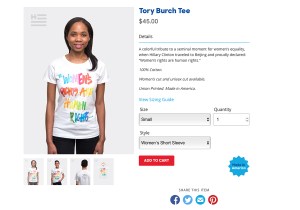