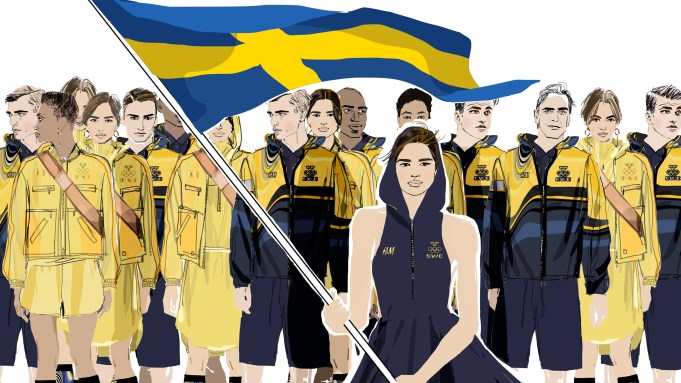 GREENING THE OLYMPICS: As the Rio Olympics kicked off amid concerns about pollution in the city’s Guanabara Bay, H&M made a statement about the environment with its outfit for the Swedish flag bearer at the opening ceremony, swimmer Therese Alshammar.

Winner of three Olympic medals, Alshammar wore a dress in a slinky navy blue fabric made of organic silk and Tencel. Designed by H&M’s in-house studio, the outfit combined a hooded sleeveless top and an asymmetric tiered skirt, and was decorated with fabric from recycled garments gathered through its Garment Collection Initiative.

H&M revealed in 2013 it had signed a four-year contract with the Swedish Olympic Committee and Swedish Paralympic Committee to create outfits for the opening and closing ceremonies and develop a full range of clothes for athletes to wear during travel and in the Olympic village for training and leisure.

The Swedish fast-fashion retailer has created around 160 items for the athletes competing in Rio, including umbrellas, travel kits and suitcases. It has also designed competition clothes for sports including track and field, rowing, shooting, tennis, golf, football and handball, among others.

The collection is based on the Swedish flag colors, yellow and blue, and features functional elements alongside quirky details, such as facts about Sweden that feature on prints, inner seams, drawstrings or small notes inside garments. These include trivia such as Prince Daniel of Sweden’s golf handicap (4.4, apparently) and the year the Swedish meatball was introduced (1755).

The garments are made of sustainable materials such as recycled polyester. H&M said it collected 12,000 tons of textiles for reuse last year, the equivalent of 65 million T-shirts. Sustainably sourced materials made up 20 percent of the total material it used, up from 14 percent in 2014.

The retailer has also been growing its Conscious Collection, launched in 2011, which uses materials such as organic cotton, organic linen, Tencel and recycled polyester. It now includes a Conscious Denim line and a Conscious Exclusive collection of red-carpet looks.