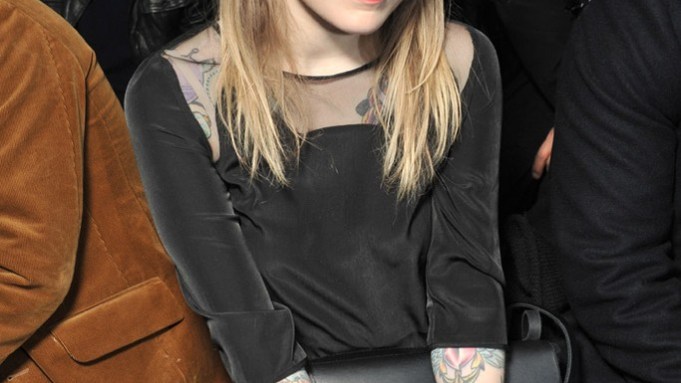 POP-UP SHOW: “I’m just twitching a bit, but I’m all good,” Jourdan Dunn said jokingly after being blinded by flashbulbs on arrival at the Grand Palais, where Hennes & Mauritz staged the second Paris outing for its newly renamed H&M Studio line on Wednesday night. The British model was joined by a host of celebrities and designers including Jessica Alba, Miranda Kerr, Solange Knowles, Marie de Villepin, Alexis Mabille and Daniele Cavalli for the evening fashion show, which featured a live performance by HollySiz, aka French actress Cécile Cassel.

Dunn recently teamed up with Chanel Iman and Joan Smalls to cook a vegan dish for her Web series “Well Dunn” on Jay Z’s Life + Times site, and she has her sights set on feeding her fellow models. “The plan is to actually do catering backstage at shows, because some of the catering at shows is like really, really rubbish,” she said.

While Dunn took in the action from the front row, Smalls and other models including Saskia de Brauw, Lindsey Wixson and Izabel Goulart paraded in flimsy lingerie-style silk slips and body-conscious fine knits that were paired with bulkier pieces such as a navy aviator jacket or a cream fake fur chubby coat.

Evening looks included a black velvet dress embroidered with bands of bugle beads for a glam spin on a sports jersey, and a backless metallic mesh minidress. A selection of the catwalk looks will go on sale on Sept. 4 in 250 H&M stores worldwide as well as online.

Kerr, who appears in H&M’s spring advertising campaign, recently recorded an Elvis Presley cover, “You’re the Boss,” with Broadway star Bobby Fox. “I used to sing when I was little with my grandma playing the piano, so I thought why not?” she said. “Well, I mean, you’ll see — it’s just a bit of fun. It’s nothing too serious.”

Alba will be seen this year in “How to Make Love like an Englishman,” and said her costar Pierce Brosnan — though technically Irish — was a great ambassador for his nation. “I don’t know if Pierce is an anomaly, or if he is like every Englishman, but he’s so handsome and sexy and chivalrous and just like a true gentleman, a kind person, a great actor and I had a lot of fun with him. So my experience with an Englishman has been wonderful,” she said.

The “Sin City” star is also expanding her Honest range of environmentally sound baby products with a line of baby formula, snacks and cereals due to launch by yearend. The company engages in philanthropic activities such as its partnership with the nonprofit Baby2Baby to deliver cribs to families in need.

Olivia Palermo and Johannes Huebl said they have yet to set a date for their wedding, but Huebl said he would leave the choice of dress to his bride. “That’s absolutely her forte and whatever she chooses, she will look beautiful in it,” he said with a smile.

Joséphine de la Baume has a full slate of film, television and music projects, including season two of British channel ITV’s “Mr Selfridge,” which stars Jeremy Piven as the Selfridges founder. “I’m coming back. I shouldn’t be saying it maybe,” she let slip.

The French actress will also be seen in independent movie “Listen Up Philip” opposite Jason Schwartzman and Elisabeth Moss.

“I play an overachieving university professor. She’s like an English professor, which is kind of ironic — it’s a joke,” said de la Baume, who was required to play up her accent for the role. “They made me even more French. It’s kind of unfair. It’s like, I’m never going to get a job again!”