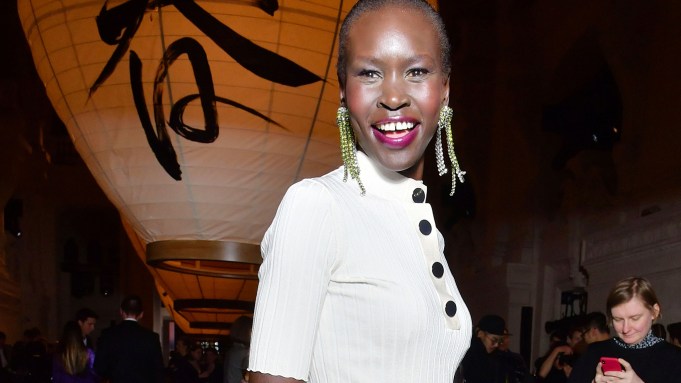 ZEN FASTER: Japan’s minimalist design and quiet grace — hardly what one expects from fast fashion. But that was the setting, and storyline, for H&M Studio’s see-now-buy-now spring collection, presented at Paris’ Musée des Arts Décoratifs on Wednesday night.

The real runway was the social media highway, though, with some 30 high-impact influencers invited to the show, including Leaf Greener, Sira Kante and Olivia Lopez.

The museum’s nave had been transformed into a Japanese restaurant with guests sat at low zashiki tables set on tatami flooring, which also served as the runway.

But it wasn’t entirely zen. Guests scrambled to find the right size of tabi socks; a woman fell down one of the table pits and had to be yanked out.

Taking in the scene, with giant paper lanterns glowing overhead, Alek Wek was living the moment. “I can feel my feet touching the floor, the room is so beautiful. I can’t wait to sit down, because I love practicing yoga,” she said.

The guests eventually settled in to dine on sushi and sake. Actress Naomie Harris held court at a central table. “I’m feeling amazingly zen, I couldn’t be any more zen if I tried,” quipped the actress who is about to promote “Rampage” with the Rock, aka Dwayne Johnson. But first she’ll be heading to India for a spa vacation. “I’m going to be zen-ing properly,” she enthused. Harris’ table neibors included Caroline de Maigret, Pierre Niney and Alexa Chung, who whooped as pals including Edie Campbell and Adwoa Aboah walked by.

The women’s looks centered on long, lean silhouettes: flowing dresses and tunics and wide trousers, with  clean lines and functional pockets. Also channeling soft minimalism, the main print was based on characters of the Japanese alphabet, cut up and worked in soft painterly brushstrokes.

The collection went on sale immediately after the show, which ended in a shower of cherry blossom confetti, and was destined for a selection of stores the next day.

“We wanted to look to the contradictions of Tokyo. It’s something that’s really sensual, soft and fluid as well as urban and energetic,” said Andreas Löwenstam, head of design men’s wear.

“It’s really our own fashion, and we hope that people feel it’s a fashion-forward collection,” said Pernilla Wohlfahrt, head of design. She acknowledged there’s still work to do to get the struggling retailer back on track.

“Looking at our performance over the past few years, of course we’re not happy. We believe that we can do a lot of things [to improve]. We can do a better job of following our customers more closely, and do better collections. Maybe the look of our stores could be better, we’re doing a lot of tests this year in Sweden and other places, possibly to start rolling out in 2019.”