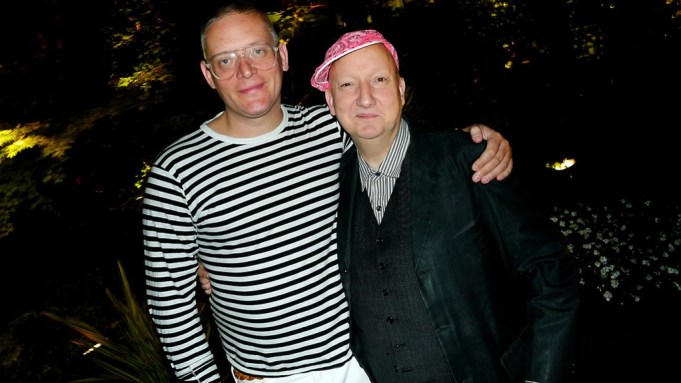 BREACHING THE FORTRESS: Katie Grand found an unusual venue to celebrate her third accessories collaboration with Hogan during Milan Fashion Week — a gentlemen’s club tucked away behind the city’s famous Duomo cathedral.

The Love magazine editor-in-chief said she was looking for a location that had not been used before, and a scouting visit to the men-only Società del Giardino piqued her interest. “We were outside for, like, 10 minutes because they wouldn’t let women in whilst there were men looking. It was kind of like going into the dark ages or something, so the whole process was very charming,” she explained.

At the party on Wednesday night, female guests including Pixie Lott, Portia Freeman and Suki Waterhouse streamed unfettered into the sprawling club, where the party stretched from a chandelier-studded reception area to a spectacular walled-in garden.

Gwendoline Christie, who plays Brienne of Tarth in “Game of Thrones,” said it was not her first time at this type of venue. “In my teens, I used to dress up as a man and go to The Garrick Club [in London],” she revealed. “They all dressed up in women’s clothes.”

Waterhouse is preparing to make her second big-screen appearance next year in “Love, Rosie,” opposite Lily Collins and Sam Claflin. “I’m the girl who gets in between the two high school lovers. I marry him, and I’m like the bitch,” said the model, who was dwarfed by giant billboards of images from Gang magazine.

Produced especially for the event, the third issue of the large-format publication features photographs of models including Linda Evangelista, Georgia May Jagger and Edie Campbell, shot by Daniel Jackson.

Grand said she considered the collection, which has expanded to clothing this season, her most accomplished so far. “By this one, I felt like we were in it for the longer run, so I probably pushed them harder than they had been before. I thought that there were certain things with the bags which weren’t luxurious enough, so I was really pushing them on the detailing and the finish and the hardware particularly,” she explained.