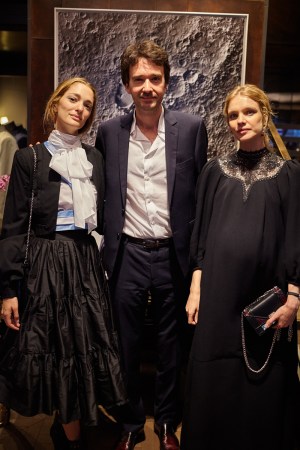 “They came up with the idea of an Argentina-themed issue. It wasn’t me. But I love my country,” said Sofía Sanchez de Betak, the Buenos Aires-born art director and graphic designer who was tapped as the issue’s guest editor. She was wearing a black and white outfit by Argentine designer Pablo Ramírez and nibbling on empanadas from Clasico Argentino, Paris’ hip Argentinian food concept. “These are delicious,” she said. “We’re moving right next to the Argentine establishment in Paris, El Palenque, in the 5th arrondissement. In New York, the best is El Gauchito in Queens,” she continued, loquacious.

“The Argentinian ambassador jokes that he has found his successor,” said husband Alex de Betak, who was sipping for his part a mate soda. The show producer is off to Russia for a Fendi exhibition at Moscow Museum of Modern Art and then to England for the Dior cruise show at the Blenheim Palace in Oxfordshire.

“I used to go to Uruguay for holidays. It is marvelous,” said a pregnant Natalia Vodianova in a black embroidered dress. “With the four children, it’s less easy to fly there,” she noted. Berluti honcho Antoine Arnault confirmed. “Argentina…” he mused. The couple was to head to the Fondation Louis Vuitton where French artist Daniel Buren just unveiled his temporary installation.

“Parisians dream about Argentina,” said Seward, the Paris-based designer also with Argentine roots, who contributed to the Holiday issue. “I gave them photos of my family, my grandmother, etc.,” she said. It will be a busy summer for Seward, who’s to open a store in Los Angeles in July, and one on Boulevard Saint-Germain in Paris that’s slated for September.

Meanwhile, Michel Gaubert said he’s going to Brazil as he’s producing the soundtrack for Louis Vuitton’s cruise show in Rio de Janeiro and Vincent Darré said is working on a book for Rizzoli for fall 2017. “I shouldn’t say it; I am far from being done,” Darré noted.

“Argentina is very much a Holiday destination: there’s an old aristocracy vibe, it’s chic,” said artistic director Franck Durand, who’s behind the revival of the American travel publication that is published biannually in English. The next issue will be dedicated to Korea. “We’re in talks to launch a Korean license for Holiday,” he said, eating a dulce de leche ice cream.

Daniel de la Falaise who teamed up with Holiday on the newly opened Holiday Café in Paris’ chic 16th arrondissement had concocted palate fresheners, involving apples and ginger. The private chef said he’s going to perform with Colin Field, the legendary barman of The Ritz Paris, at Il Pellicano hotel in Italy in August.