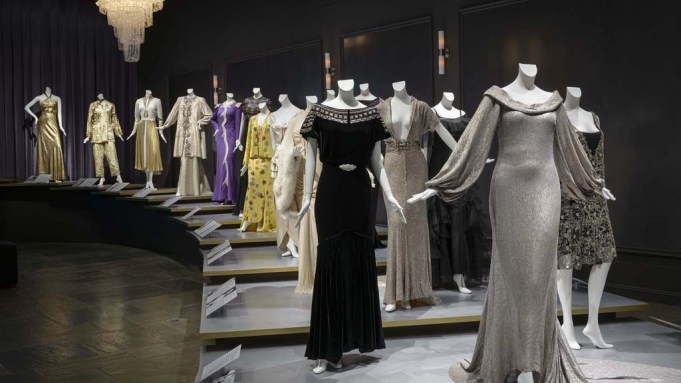 SHOOTING STARS: About 4,500 visitors have been visiting the Museum of Fine Arts in Boston each day to catch “Hollywood Glamour: Fashion and Jewelry from the Silver Screen.” Adrian, Chanel and other designer gowns worn by Greta Garbo, Gloria Swanson, Marlene Dietrich and other film stars are on view through March 8, as well as jewelry from the Thirties and Forties. Mae West’s silver leather platform shoes (that were believed to be designed by Pepenie and boosted her height by 8.5 inches) are among the early standouts. Joan Crawford’s Verger Freres jewels and a Travis Banton-designed silver lame evening gown worn by Mary Ellis in the 1935 film “Paris in Spring” have been other popular items, according to the MFA’s curator of fashion arts Michelle Finamore. In addition to being one of the key sponsors, Neil Lane loaned such pieces as a diamond and sapphire necklace by Trabert & Hoeffer – Maubossin from his private collection.

With “Hollywood Glamour” up-and-running, the MFA’s Finaore is pulling together a fashon and technology exhibition that will feature a 3D printed dress by Dutch designer Iris Van Herpen and Neri Oxman of the Massachusetts Institute of Technology that will bow next fall.