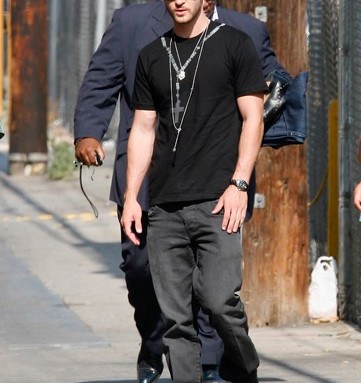 HOT TICKET: Justin Timberlake will have not one, but two shows during New York Fashion Week. Not only is he performing at Fashion Rocks on Sept. 5, but the singer plans to rock the Roseland Ballroom on Sept. 7 at 9 p.m. as models take the catwalk decked out in the latest looks from his clothing line, William Rast. This won’t be the first time Timberlake has shown his collection — he first presented it in Los Angeles back in October 2006. Despite the fanfare then, the collection never took off and Timberlake, along with his business partner-childhood friend Trace Ayala, decided to scale back. Last fall, Marcella and Johan Lindeberg were named creative directors of the line, and the first effort was shown off during a presentation in February in New York. Round two comes in September.

PARTY ARMANI: DJ Tiësto may not have been greeted with balmy climes when he hit London for the U.K. leg of his “In Search of Sunshine” tour Friday night, but pouring rain didn’t dampen the party atmosphere when he played a private set at Armani Exchange’s Regent Street store. An adoring crowd — which had queued outside the store all afternoon — turned up to dance away to Tiësto’s entire 40-minute set on the shop floor. “Things were really bubbling under the surface for a long time but now everything has taken off,” said the DJ of his fame in Europe. Later, he headed to London’s O2 arena for a sold-out concert. And despite scoring a hit with the Armani crowd, he said he doesn’t plan to collaborate with the Italian designer just yet. “I think we can only be really good at one thing, and for me that’s music,” said Tiësto. “But who knows, maybe in the future.”

HOLLYWOOD TO HIGH STREET: Spanish fast-fashion chain Mango is sticking with its celebrity design team of Penélope and Mónica Cruz for fall. The company has also tapped photographers Mert Alas and Marcus Piggott to shoot the collection’s campaign again, which makes it the fourth season the duo has shot the images for the Penélope & Mónica Cruz for MNG line. Alas and Piggott also shot the Elizabeth Hurley for Mango campaign, which launched in early summer, alongside shooting fall ads for labels including Armani Jeans, Miu Miu and Donna Karan.

ROYAL COPENHAGEN: While Danish fashion’s favorite ambassador, the Crown Princess Mary Elizabeth Donaldson, was otherwise engaged at Friday’s opening ceremony of the Beijing Olympic Games, the latest addition to the royal family, Princess Marie Cavallier, lent regal glamour to the capital’s fashion week. The Parisian-born princess, who wed Queen Margrethe II’s youngest son Prince Joachim last May, sipped Champagne in the front row of Odd Molly’s runway show last week, which was hosted by the Swedish label’s new face, Helena Christensen, at Copenhagen’s Hotel d’Angleterre. “I like fashion so I go to the shows whenever I’m here,” said the princess, adding, “I love Danish design but I can’t spend all my time going to fashion shows.” Danish native Christensen, meanwhile, had jetted in from Beijing, where she was a judge alongside Viktor & Rolf in design awards for the lingerie brand Triumph. The model lauded Odd Molly’s colorful bohemian collection.

“It’s great to see a show where there’s not a single black dress,” she said.

STELLA MCCARTNEY OPENS IN BANGALORE: Stella McCartney opened her first store in India last week, in Bangalore. The 1,600-square-foot space is located at 1 Vittal Mallya Road at the center of the city. The store carries McCartney’s ready-to-wear, accessories and lingerie collections along with her fragrances and skin care line, Care by Stella McCartney. The space has been done out with maple veneer walls decorated with wooden birds, tiled floors and brass fixtures, in the designer’s signature color palette of shades of pink and white. The Bangalore store is the first to open as part of the brand’s long-term agreement with TGS International Marketing PvT Ltd. to open six stores in the region over the next two years and exclusively distribute the brand in India. Next up, Stella McCartney will open a store in New Delhi, but a spokesman for the company said a date for that store opening isn’t yet confirmed.

THINKING BIG: Diesel is making it big in Brazil. On Wednesday, the Italian denim giant opened a 5 million euro ($7.7 million), four-story flagship, housing 8,700 square feet of retail space in São Paulo. And the company is not stopping there. Five more units are planned in the country over the next five years — in Recife, Porto Alegre, Belo Horizonte, Curitiba and Brasilia — taking the number of Brazil locations to eight. The new São Paulo unit features a VIP area, kid’s department, lounge bar with terrace and garden as well as an entire floor dedicated to the company’s designer brands: DDG, Martin Margiela and Dsquared, furnished with its own private elevator.