The fashion set flocked to a party for Jaguar at the 2011 New York International Auto Show last week. 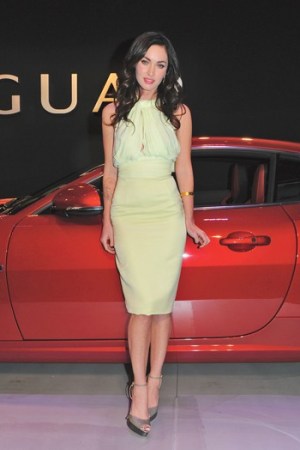 HOT WHEELS: The 2011 New York International Auto Show roared into town last week and the fashion flock turned out to ogle some of the most stylish new models about to hit the road. Barneys New York’s Simon Doonan decoupaged a replica of a vintage Jaguar E-Type to celebrate the car’s 50th anniversary. The colorful vehicle, bedecked in period magazine pages, was checked out by Megan Fox, Gilles Mendel, Julie Macklowe, Jennifer Creel, Lisa Airan and Lydia Fenet at a party at the IAC Building.

Audi, meanwhile, introduced its new A7 five-door coupe, available at dealerships next month, also at the IAC Building. The German automaker erected a 15,000-square-foot interactive billboard in Times Square for the occasion, highlighting other examples of bold design in various cities, including the Jil Sander, Converse and Moss shops in New York. Passersby can tweet their own nominations for bold design and see their ideas go up on the massive billboard through May 1.

MAKING THE CUT: Galen Weston, whose family owns Selfridges, Holt Renfrew and Brown Thomas in Ireland, will be attending the royal wedding at Westminster Abbey with his wife, Hilary Weston, according to St. James’s Palace officials. The couple is described in a list of confirmed wedding guests as friends of the Prince of Wales and his family. Weston used to play polo with Prince Charles — although the two men laid down their mallets a while ago in favor of less dangerous sports. Another bride-to-be who is also keeping mum about her wedding dress designer — Charlene Wittstock — will also be attending with her fiancé, Prince Albert of Monaco. Other celebrity guests include David and Victoria Beckham — David and Prince William worked together on England’s failed 2018 World Cup bid — Guy Ritchie, Joss Stone and Elton John. The palace stressed that the list was only a partial one, and not all of the guests’ names were there.

The British press has also reported that Daniella Helayel of Issa, a favorite designer of Kate Middleton’s who may or may not be designing the wedding dress — will also attend. Neither St. James’s Palace nor Helayel would confirm the reports.

The ensemble was an improvement over some of her previous questionable looks in court, including a beige rubberized Raquel Allegra minidress, a low-cut Chanel blouse paired with white Chanel trousers and a white Kimberly Ovitz minidress she donned in February.

Lohan chose last month to stand trial rather than accept a plea bargain in this latest case, in which Venice Beach jewelry store Kamofie & Co. alleges she tried to steal a $2,500 necklace. On Friday, Lohan was sentenced to 120 days in jail for violating her probation but is out on bail and her lawyer is appealing the sentence. Lohan was ordered to appear at a May 11 arraignment and a trial date has been set for June 3 on the necklace charge — which means at least two more outfit opportunities for the fashion-loving jailbird.