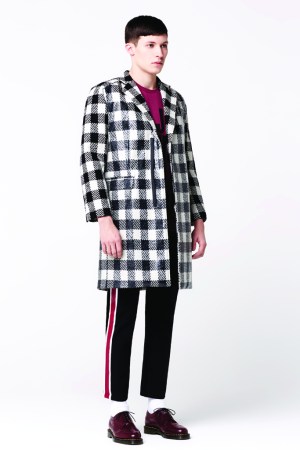 HOUSE OF HOLLAND SEASON 001: Designer Henry Holland launched his debut men’s line with a presentation in Selfridges’ car park Sunday night. The designer – who’s launching the collection at stores including Selfridges, Opening Ceremony in the U.S. and Galeries Lafayette in Paris and Beijing immediately, and calling it Season 001 – said designing men’s was a different process than women’s. “You’re always asking yourself, ‘Do I want to put that on my back?’” said Holland.

While Holland envisaged the collection as “building [a] wardrobe,” he turned to reference points from his upbringing in northern England for inspiration, as well as “street culture tribes — like rave, casuals and terrace culture,” said Holland. The result was a lineup of sporty, simple shapes, which telegraphed Holland’s sense of fun. There were soccer shirts with slogans such as “Lad” and “Legend,” bomber jackets in black-and-white chevron stripes, and leather jackets in color blocks of black, purple and pink.

And to launch the collection, Holland tapped photographer Martin Parr to give a wry, sidelong take on the line’s campaign. Parr, who’s known for his observational images, shot the collection in Holland’s home town of Ramsbottom, in locations such as laundromats, on terrace-lined streets and in pool halls. Holland also produced a few pieces bearing Parr’s images, such as a check sweater with a photo of a cup of tea. “I’ve always wanted to work with [Parr],” said Holland. “His was one of the first exhibitions that I came to see when I moved to London, and I absolutely fell in love with his pictures. To work together on a project like this is a dream come true.”