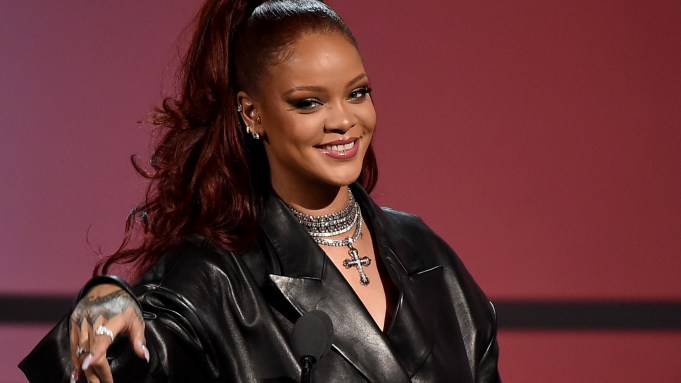 Rihanna’s effect on the fashion and beauty industries is undoubtable.

Long acclaimed for her eclectic, edgy style, the Barbados-born singer who turns 32 today, has brought her star power to a number of brands — including Armani, Dior and Manolo Blahnik, to name a few — before delving into her entrepreneurial side.

She made her business foray in 2017, creating her Fenty Beauty line with inclusivity and diversity at the forefront of the brand’s mission. Rihanna launched the brand with an unprecedented 40-shade foundation range — much larger than the average beauty brand offer starting out — and has expanded the range to now include 50 options, setting the new standard that brands have soon after followed.

Rihanna then took that ethos and applied it to the intimates industry, hosting a lingerie fashion show for the second collection of her Savage x Fenty line that challenged beleaguered lingerie giant, Victoria’s Secret.

She’s now bringing her business acumen to luxury fashion with her Fenty fashion label in partnership with LVMH. Just a few months after launching the brand, Rihanna was the recipient of the Urban Luxe Award at the British Fashion Awards in December.

As Rihanna celebrates her 32nd birthday, WWD looks back at three ways the singer-turned-entrepreneur has transformed the fashion and beauty industries.

Rihanna turned the beauty industry on its head when she launched her Fenty Beauty line with LVMH in September 2017, starting with a foundation range of 40 shades, an unprecedented amount for a new beauty brand. Her focus on inclusivity paid off, with the brand earning sales north of $100 million in its first few weeks on the market.

The singer’s foundation range was come to known as the “Fenty Effect” in beauty, setting the new standard that diversity and inclusion in terms of shade ranges are the new norm. As customers increasingly expect this from the beauty brands they purchase from, a number of emerging and heritage brands have followed suit with their own extensive foundation shade ranges. Rihanna herself has even upped the ante, expanding the first range of foundation to now include 50 shades and launching a corresponding concealer also with 50 shades.

Rihanna has been able to sustain the success of her Fenty Beauty brand since its launch, building her beauty empire with new product launches, including concealer, highlighter, liquid lipstick and body luminizer, all of which have been received with much acclaim by customers and influencers.

The launch of the Pro Filt’r Concealer in January 2019 proved to be the brand’s biggest release to date. According to Tribe Dynamics, a software company that quantifies consumer social media engagement with its term earned media value, the product generated $68 million in earned media value via roughly 1,900 influencers — including powerhouse names like Jeffree Star and Nikkie de Jager — in 2019.

The company’s fourth-quarter 2019 global beauty report also shows that Fenty Beauty entered the top 10 cosmetics brands list for a number of countries, including the U.S., the U.K., France, Australia, Canada and Italy, among others.

Rihanna made history in May 2019 when she launched her Fenty fashion label in partnership with LVMH, making her the first black woman to head a brand owned by the luxury conglomerate. The launch of her luxury fashion brand also marked the first time that LVMH has launched a fashion brand from scratch since the establishment of couture house Christian Lacroix in 1987. This is also the first time LVMH has invested so heavily in a celebrity.

LVMH’s investment has already proven to pay off. In December, Rihanna was awarded with the Urban Luxe Award at the British Fashion Awards.

Rihanna proved that a lingerie fashion show can be empowering, entertaining and provocative in the post-#MeToo era with her hybrid fashion show concert for the second collection of her Savage x Fenty line in September 2019, giving the embattled Victoria’s Secret a run for its money.

The singer put on a high-impact show at Brooklyn’s Barclays Center during New York Fashion Week — which was later streamed on Amazon Prime Video ­— enlisting the likes of Halsey, Normani, Migos, A$AP Ferg, DJ Khaled and more to perform as a diverse set of models debuted the collection.

Without a doubt, the lingerie show resonated with the public. According to Tribe Dynamics’ September 2019 apparel report, Savage x Fenty ranked eighth in the top 10 list, recording $14.8 million in earned media value, a 394 percent month-over-month increase.

Rihanna’s lingerie fashion show was a hot topic in September 2019, spiking in social media content on Sept. 11 (the day of the show) and on Sept. 20 (the day the show hit Amazon Prime). According to Launchmetrics — a brand performance cloud that equates a brand’s marketing activities to a monetary value — the brand recorded $536.4 million in media impact value on Sept. 11 and $547 million in media impact value on Sept. 21.