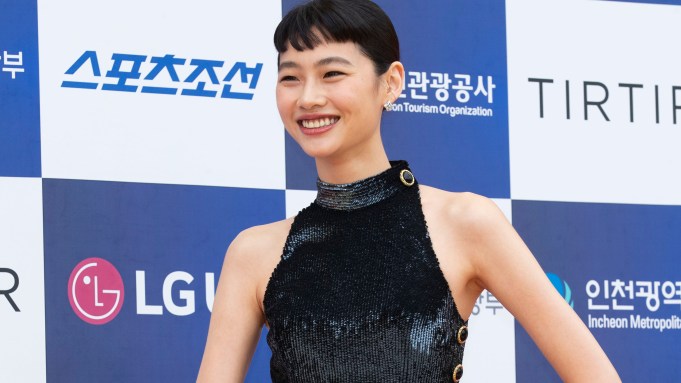 HoYeon Jung had another standout fashion moment in Louis Vuitton.

On Tuesday, the Korean model-turned-actress attended the inaugural Blue Dragon Series Awards wearing a black sequined halter-neck dress with an asymmetric, flowy skirt with button detailing on one side. She paired it with silver Mary Jane heels with a jewel-embellished strap.

Her hair, which was done by Hye Young Lee, was up in a bun with short bangs framing the front of her face. She was styled by Aeri Yun, who has also worked with Jang Yoon-ju and Karlie Kloss.

The awards ceremony, held at Paradise City in Incheon, South Korea, was organized by Sports Chosun and is meant to recognize the achievements of the streaming content in South Korea, including Netflix’s widely popular “Squid Game,” known as the most-streamed television series on the platform to date.

Following the success of “Squid Game,” which was HoYeon’s first acting role, she was tapped to be Louis Vuitton’s global Maison Ambassador for fashion, watches and jewelry in October. She has since worn creations by the house to awards shows and high-scale events such as the Met Gala.

Before acting, HoYeon was best known in South Korea for her career as a model — she placed second on the fourth season of “Korea’s Next Top Model” when she was 20. After she made her international modeling debut in 2016, she walked for Opening Ceremony, Marc Jacobs, Fendi, Rag & Bone, Alberta Ferretti and Max Mara.