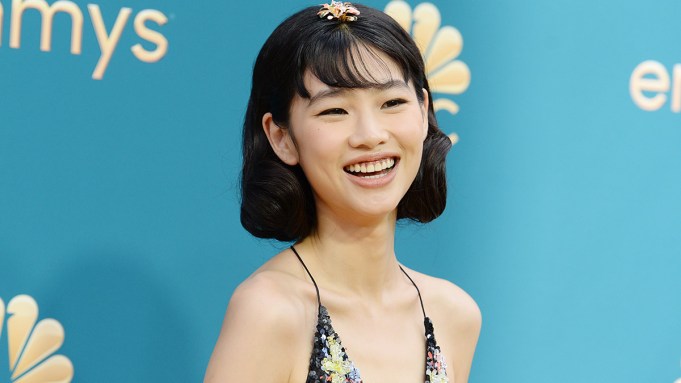 HoYeon Jung had a colorful moment as she arrived for the Emmy Awards at the Microsoft Theater in Los Angeles on Monday. Jung wore a shimmering embellished dress by Louis Vuitton with a high slit and spaghetti straps.

The “Squid Game” actress coordinated with a pair of black strappy heels.

Jung kept her hair in a sleek bob and added a floral detail at the center. She kept her makeup minimal with a winged eyeliner and a nude lip.

After her breakout role in the hit Netflix series “Squid Game,” the model was tapped by Louis Vuitton as their global house ambassador. Jung worked with the brand in the past as she modeled in Louis Vuitton’s 2017 spring ready-to-wear show during Paris Fashion Week.

The 2022 Emmy Awards honored the best performances and programs in television. “Saturday Night Live” cast member Kenan Thompson hosted the event at the Microsoft Theater in Los Angeles. HBO’s “Succession” is leading the nominations with 25 nods, followed by “Ted Lasso” (20), “The White Lotus” (20), “Hacks” (17) and “Only Murders in the Building” (17). The Geena Davis Institute on Gender in Media also was presented with the Governors Award in recognition of their work to promote gender balance in the entertainment industry.