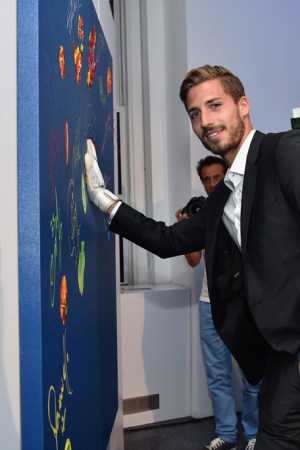 WATCH THE GAME: Hublot gave a big New York welcome — with Parisian flair — to the Paris Saint-Germain soccer team Wednesday night. The Swiss watch brand celebrated its ongoing partnership with the team, which is here for an 18-day tour as part of the International Champions Cup, by hosting an event to unveil its new Big Bang Unico Bi-Retrograde Paris Saint-Germain watch. This limited-edition red, white and blue titanium case model features a secondary clock that keeps two 45-minute periods — the official length of a soccer match.

Hublot embraced pro sports in 2008 when it joined forces with Manchester United soccer club. This week’s event marked another stage of their “Hublot Loves Football” campaign, which launched last year with the FIFA World Cup Brazil, for which they were official timekeepers, as well as the FIFA Women’s World Cup in Canada this summer. In the past the brand has also had an interest in music, including a partnership with Depeche Mode for charity.

In attendance at last night’s event, held at a venue overlooking Rockefeller Center, was the entire French PSG team, hot on the heels of a win against Italy’s ACF Fiorentina team Tuesday night in New Jersey. While players David Luiz, Edinson Cavani and newly joined goalie Kevin Trapp — who demonstrated his developing French skills — all agreed that New York was a favored spot along the tour, Brazilian-born Maxwell expressed his preference for Los Angeles, citing “the spirit, Malibu and surfing.” When it came to style, however, all agreed that personal comfort trumps any particular designer look.

The players cordially signed balls for guests, whether carried along to the event or swiped from display in the rooftop’s fountain. And making the players feel a touch of Paris in the Big Apple, the party’s chef, Dominique Ansel, engaged players in madeleine-cookie-and-ice-cream-popover making, while French artist JonOne gave a live art demonstration and helped the team create a painting to be auctioned later.